New lines and engine options for the Ford Explorer 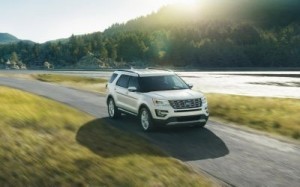 (Relaxnews) – The Ford Explorer is America’s most popular SUV and to ensure it retains the top spot, Ford has done everything it can to make the new model stand out in terms of features, economy and refinement.

In the US, the Ford Explorer is seen as the crossover vehicle: the car that brought SUVs in from the cold of farm and ranch use and into the warmth of the average family’s two-car garage. Since its launch in 1990, it has established itself as America’s most popular SUV — 7 million sales and counting — so when Ford unveils a new model, consumers pay attention.

The first thing consumers will notice about the new Explorer, unveiled officially at the LA Auto Show this week, is that the vehicle has a very European styling aesthetic. With angular but smooth lines, the new model would look right at home parked next to the equally new Land Rover Discovery Sport.

But more impressive is the sheer number of smart features and safety systems that Ford has packed in. The Explorer has front and rear cameras for spotting potential obstacles, plus a new park assist system that takes the strain out of parallel and perpendicular parking and out of exiting tight spaces too.

When backing out of a space, a radar system scans for oncoming traffic and the same system then monitors the blind spots on either side of the car when traveling on multi-lane highways. The car will warn you if something is in that blind spot and also when you’re accidentally veering over the lane markings.

Other technological touches include USB charging points located throughout the cabin for plugging in mobile devices and an automatic tailgate release that can be activated simply by shaking a foot under or near the rear bumper — perfect for when both hands are full of shopping.

The new Explorer uses active grille shutters that automatically open and close based on speed to increase or decrease airflow into and around the vehicle and improve aerodynamics and therefore fuel efficiency.

Also helping to reduce fuel consumption is a new 2.3-liter, four-cylinder EcoBoost engine which offers an increase in horsepower and torque over the 2-liter engine in the outgoing model while increasing acceleration and miles per gallon. Efficiency figures are yet to be officially certified but Ford says that the new engine’s stats will be impressive.

“The new Explorer isn’t giving up its reputation as a leader in highway fuel efficiency — especially for the customer who wants a vehicle that is also a capable trail warrior,” said Arie Groeneveld, chief engineer for the new Explorer. “Customers will not only get the performance of a larger engine, they won’t sacrifice efficiency because of it.”

For the first time, Ford will also be offering a Platinum edition of the Explorer which will take things up a level in terms of interior and exterior fit and finish and in terms of standard equipment.

People can catch their first glimpse of the new Ford Explorer in the flesh at the LA Auto show on November 21 when it opens its doors to the public.