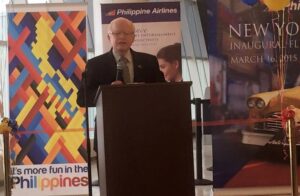 Ambassador Jose L. Cuisia, Jr. while delivering his remarks during arrival and send off ceremony for passengers of Philippine Airlines maiden flight to NewYork in mid-March this year at the John F. Kennedy International Airport. (Philippine Embassy Photo by Emil Fernandez)

WASHINGTON, DC  – Investments in people, infrastructure and reforms have transformed the Philippines into a prime destination for foreign capital in recent years, according to Philippine Finance Secretary Cesar V. Purisima, who was one of the keynote speakers at the Economic Briefing and Investment Conference held on 26 June 2015 at Goldman Sachs in New York City.

Entitled “Invest in the Philippines: Asia’s Bright Spot,” the New York Conference underscored the significant improvements the country has  made in terms of macroeconomic governance, promoting transparency, enhancing the ease of doing business, and focusing on infrastructure development. These factors, combined with a competent, hardworking and growing workforce, and a central location in an economically dynamic region, have increased the attractiveness of the Philippines in the eyes of foreign investors.

“The Philippines is not perfect, nor is it completely efficient, but to investors like you, it is an opportunity. In fact, many companies are already silently making money,” Secretary Purisima stated.

BPI Capital Corporation President Dennis Montecillo agreed with the bullish assessment, saying that there has been a noticeable shift in the demand for foreign private equity. Montecillo, who previously worked for Morgan Stanley in Hong Kong, recounted how private equity clients have now developed a keen interest in the Philippines, with some calling the Philippines their core markets, from demonstrating a very low level of interest in 2000-2007.

Bangko Sentral ng Pilipinas Deputy Governor Diwa Guinigundo further substantiated the Philippines trajectory and he forecasts the debt to GDP ratio to continue its downward trajectory, anticipating a debt to GDP ratio of 0% within the next 10 years. He adds, however, that “there is no magic number with regards to any country’s debt to GDP ratio. The emphasis must be placed on the fiscal space and the government’s ability to spend in terms of investment and infrastructure.”

Philippine officials and private businesses have pointed to good governance as the main driver of economic growth. Trade and Industry Secretary Gregory L. Domingo and National Competitiveness Council Co-Chair Guillermo Luz highlighted the Philippines’ steady rise in competitiveness rankings and assured the audience that liberalization and economic reforms will continue.

Secretary Domingo enumerated some encouraging developments, including the release of the new Foreign Investment Negative List which features fewer restrictions on foreign investments; the impending amendment of the Cabotage Law that will allow foreign vessels to make calls at multiple ports; and the European Union’s granting of GSP+ status to the Philippines, which gives about 6,000 product lines duty-free access to the European market.

He also cited the substantial growth of the IT/BPO sector, which is expected to generate US$ 25 billion in revenues in 2016 from the current amount of US$ 18 billion.

Manolito Tayag, Accenture’s Country Managing Director for the Philippines, projected that the IT/BPO sector will go up from 1 million to 1.3 million employees in 2016. He explained that the future growth of the country’s IT/BPO sector is underpinned by its moving up the value chain, including analytics; the opening of new markets in Latin America, Europe, and even within the Philippines; identifying niche industries; locating regional and global centers in Manila; and creating a new wave of BPO cities.

Upgrading the country’s infrastructure is also seen as a key to boosting productivity and tourism.

Transportation and Communication Undersecretary Rene K. Limcaoco outlined the transport development plan, and explained the key performance indicators relating to reducing transport costs by about 8.5%, and logistics costs to 15%. He noted that the Philippines’ 653-kilometer North-South Rail is currently the largest infrastructure project in the country’s history at over US$ 8 billion.

The Philippine Government has actively sought private sector participation in infrastructure development. Undersecretary Cosette V. Canilao, Executive Director of the Public-Private Partnership (PPP) Center, informed the group that three projects worth US$ 4.24 billion are being rolled out, while six projects amounting to US$ 4.6 billion are pending formal approval for roll out.

Mr. Jay Collins, Vice Chairman of Corporate and Investment Banking at Citigroup, acknowledged that the Philippines has made strides to free up fiscal space and ensure that it is infrastructure investment friendly.

He also emphasized that infrastructure risk needs to be assessed with the overall macro-environment and that focus should be given on how the domestic financial institutions can help bridge gaps and provide expertise in areas such as deal structuring and contract standardization.

Notwithstanding the significant reforms and positive outlook, the constitutional limitations on foreign equity as well as the prohibition on foreign ownership of land continue to put off investors, according to Atty. Alex B. Cabrera, Chairman and Senior Partner of Isla Lipana & Co. However, he stressed that there are legal means to surmount these challenges.

Special economic zones represent a productive use of land to attract and grow foreign investments.  Bases Conversion and Development Authority Executive Vice-President Aileen Zosa referred to the success of Clark Base as a special economic zone and its high ability to host backroom and BPO operations of various companies. She introduced the development of the Clark Green City initiative which incorporates over 9,400 hectares of forest land for mixed-use commercial development.

“Invest in the Philippines: Asia’s Bright Spot,” garnered positive responses, due in large part to its effort to present a comprehensive and balanced appraisal of the state of the Philippine economy.

“The Republic of the Philippines delegation conveys the image of a dynamic nation, proud of its past achievements in the economic and social fields, but also aware of what lies ahead and keen to take on the challenges that will turn it into one of the world’s top 20 economies by 2050,” said Mr. Dominique Jooris, moderator of panel on the Philippine macroeconomy, and Managing Director for Asia Credit Capital Markets at Goldman Sachs.

In his remarks, Philippine Ambassador to the United States Jose L. Cuisia, Jr. addressed the issue of making the reform process irreversible.

“But looking towards the future, to the post-Aquino era, I should like to note that in order to ensure the sustainability of our good governance dividends, the Philippine Government is now focusing on a menu of crucial policy areas in the remaining months and days of the Aquino administration in order to preserve the gains of the good governance reforms that have been put in place.”

The Economic Briefing and Investment Conference in New York City is the second stop of a high level trade and investment mission to the United States taking place from 24 to 29 June 2015. The delegation made a pitch in Washington, D.C. on 24 June and will make its final stop in San Francisco on 29 June.

The Mission is an important follow-up to the Philippines-United States Memorandum of Cooperation on an Infrastructure Collaboration Platform, which was signed during the 8th Global Infrastructure Leadership Forum (GILF) held in New York in February.

PHL Consulate will transfer to new location in March 2015