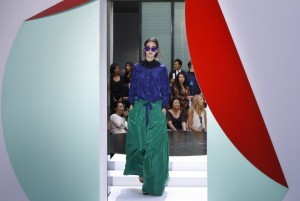 A model presents a creation by designers Humberto Leon and Carol Lim for Kenzo during the Spring/Summer 2012 ready-to-wear collection show, on October 2, 2011 in Paris. AFP PHOTO/PATRICK KOVARIK

After launching fashion store-cum-art-gallery spaces in New York, Los Angeles and Tokyo, Humberto Leon and Carol Lim are making their fashion debut at Kenzo, taking over from Antonio Marras at the LVMH-owned label.

The duo hosted a Fashion Week party at Kenzoâ€™s historic atelier near the old Paris stock exchange, with mini runway shows at half-hour intervals to showcase a look that aimed for â€œease and youthful sophistication.â€

Pant suits in bold red, blue or fishing net-patterned white, long-visored baseball caps in black or white, and a roll-call of trench coats and reworked trench-style jackets combined for a casual look with strong 1950s accents.

Giant bouffant black culotte pants were paired with a clingy yellow sleeveless knit, while a primary blue boilersuit in shimmering silk drew a round of applause.

Heels were high, chunky and metallic-shiny, with sometimes a big coloured bow wrapped at the ankle, or little foot-warmer.

Lim and Leon said they drew for inspiration on the primary colors of US painter Ellsworth Kelly, who lived in Paris in the 1950s, for a look that fused â€œAmerican style and street wear with an effortless Parisian spirit.â€

The coastal motifs in the collection â€“ with knotted fishing nets, birds and seashells â€“ evoked classic French silk scarf patterns, and little kerchiefs were also knotted over the modelsâ€™ hair, or wrapped around their caps.

But mostly the mood was American, young and bold as the models stepped out to a remix of Cyndi Lauperâ€™s â€œGirls Just Wanna Have Funâ€ â€“ backed by live drummer and cellist.