NFL in LA? Farmers Field to be LA’s new showplace 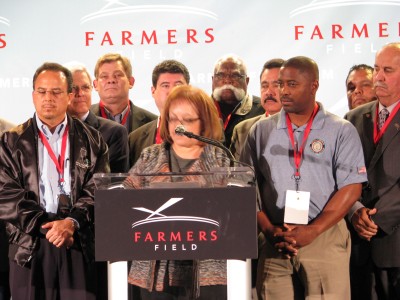 The stadium will be called Farmers Field. â€¨Farmers, the largest auto insurance company in California and the third-largest personal lines insurer in the nation, and AEG, developers of STAPLES Center and L.A. LIVE, among a portfolio of acclaimed international venues, made the announcement together in the West Hall of the Los Angeles Convention Center, the future site of the new stadium which will occupy the footprint of the current West Hall.

“This groundbreaking agreement with Farmers not only makes this the largest long- term commitment in naming rights history, it also signals the most significant step forward in creating the football stadium and event center and bringing an NFL team back to Los Angeles,” said Timothy J. Leiweke, President & Chief Executive Officer, AEG, developers of the project.

“Farmers’ commitment and partnership also allows us to completely privatize the development of the stadium, which will become the true catalyst needed to, once and for all, upgrade the Los Angeles Convention Center to become a top five facility of its kind in the nation.”

Farmers Field will be a state-of-the-art event center contiguously connected to the Los Angeles Convention Center allowing Los Angeles to compete for and attract top-tier conventions and trade shows previously unable to commit to Los Angeles. The one-billion dollar stadium will be entirely privately financed. 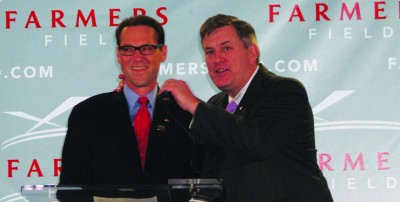 “Farmers Insurance was founded in Los Angeles and has been headquartered here for more than 80 years. We have always sought to be net givers, not net takers, in the communities we serve, and we are excited to be a part of this lasting legacy.”

“Like AEG, Farmers is a California-based company with thousands of employees and their families living and working here in Los Angeles and they share our vision of investing in our City to provide services, support and economic stimulus to make our community a better place for everyone,” said Leiweke.

During the press conference, Leiweke also detailed AEG’s commitment to develop Farmers Field at absolutely no cost to taxpayers and absolutely no risk to the City’s general fund. “This event center – complete with a state-of-the-art NFL stadium and expanded convention center facilities – is a win-win the residents of Los Angeles. And, it will not cost taxpayers a dime,” said Los Angeles Mayor Antonio Villaraigosa. “Furthermore, Farmers Field will be a catalyst for new development, creating nearly 20,000 jobs and $3 billion worth of new development in the downtown area alone.”

As part of the deal designed by AEG Global Partnerships, Farmers’ naming rights partnership will provide exclusive naming exposure and signage inside and outside Farmers Field including electronic and video messaging during events, a diverse offering of hospitality access inside and outside of Farmers Field, promotional and experiential activation areas throughout Farmers Field’s concourses and other public areas, and a variety of branded clubs and other interactive areas to be used by Farmers Insurance agents and customers. 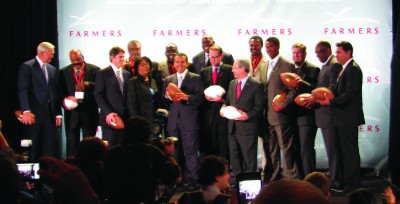 “This historic investment by Farmers shows that they clearly share AEG’s vision to bring the NFL back to Los Angeles and trust in our continuing commitment to provide best-in-class facilities and content that attracts the attention of fans worldwide,” said Shervin Mirhashemi, Chief Operating Officer, AEG Global Partnerships. “Starting today, the name ‘Farmers Field’ will become part of the lexicon of NFL fans across all demographics and regions as Farmers Field joins an exclusive family of iconic AEG developments around the globe. We are proud to call our friends at Farmers our partners in this unprecedented deal and project.”

“Farmers Field represents a rare opportunity to merge a significant investment in Los Angeles with tremendous exposure for the Farmers brand,” said Kevin Kelso, Executive Vice President and Chief Marketing Officer of Farmers Insurance. “But this extends well beyond the Los Angeles market: this showcases the Farmers brand on a national stage.”

Farmers and AEG also announced the launch of a new website, Farmersfield.com where fans can receive information about Farmers Field and sign up to be on a priority list for a variety of premium seating options. Information is now available online now at http://www.farmersfield.com. Farmers Field is also on Twitter at @BringNFLBackLA. Fans can also text NFLLA to 44144 to subscribe to free Farmers Field text message updates, special offers, and additional information about tickets (standard text messaging rates apply).

Duterte places NCR, 4 nearby provinces back to less strict GCQ