No need for Aquino to apologize over SAF 44 deaths, Palace insists 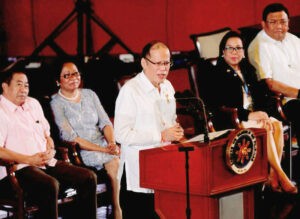 MANILA (Mabuhay) – There is no need for President Benigno Aquino III to apologize for the 44 Special Action Force (SAF) members killed during the infamous January 25 Mamasapano clash, a Malacañang spokesperson said Thursday.

Communications Secretary Herminio Coloma, Jr. said Aquino has already assumed responsibility over the incident, where SAF members clashed with Moro rebels while on a mission to neutralize foreign terrorists in Mamasapano, Maguindanao.

Coloma was reacting to Senator Ferdinand “Bongbong” Marcos Jr.’s statement that Aquino should apologize over the deaths of the 44 SAF members in his capacity as commander-in-chief of the police and military.

Marcos, who is running for vice president in the 2016 elections, was in Luna, La Union, to visit the tomb of PO3 Omar Nacionales, one of the SAF trooper killed in the encounter.

Two weeks after the clash, Aquino claimed responsibility over the deaths of the 44 police commandos, saying he would carry the “tragedy” for the rest of his life.

Coloma also rejected Marcos’ allegation that the government is doing nothing to attain justice for the families of the 44.

A supposed second batch of criminal complaints could not be filed yet as the identities of the suspects in the killing of the remaining nine SAF commandos from the 84th Seaborne command have yet to be determined. (MNS)

2-day celebration for the 70th Anniversary of Leyte Landing in Carson Oct. 19