No tsunami threat in PH after Indonesia quake 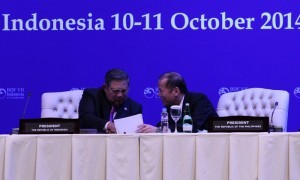 (BALI, Indonesia) President Benigno S. Aquino III exchanges views with Indonesian President Susilo Bambang Yudhoyono during the Opening Session the 7th Bali Democracy Forum at the Nusantara Hall II of the Bali International Convention Center on Friday (October 10). The gathering is an annual, intergovernmental forum on the development of democracy in the Asia-Pacific region. (MNS photo)

MANILA, Nov 15 (Mabuhay) — The Philippine Institute of Volcanology and Seismology (Phivolcs) said there is no threat of a tsunami to the Philippines following a magnitude 7.1 earthquake in Indonesia on Saturday morning.

In its advisory issued at 11:50 a.m., the Phivolcs said the massive quake did not generate Pacific-wide destructive tsunami.

“There is no tsunami threat to the Philippines from this earthquake,” it added.

The quake, which was initially recorded at a magnitude of 7.3 but was later downgraded to 7.1 by the US Geological Survey, struck Halmahera, Indonesia at 10:32 a.m.

The quake had a depth of 40 kilometers. (MNS)