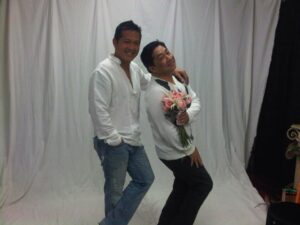 For actor Miguel Vera, the second time around must have always been sweeter (pun intended, or not). Happily meeting the press after the successful restaging of the well-known play Noli Me Tangere at the Cerritos Center for the Performing Arts, Vera said he was happy with his performance as the lead character Crisostomo Ibarra.

The actor said he was more relaxed that night and believed that he has done as much or perhaps better than when the play debuted in Los Angeles in August last year.

The fans who gave the cast a standing ovation during the curtain call certainly confirmed Vera’s assessment.

Nonie Belarmino, one of the show’s producer, added that if things would turn our right, they would bring Noli me Tangere to San Diego, another Filipino-American hub in southern California.

Belarmino believes that Noli Me Tangere remains a potent vehicle, not only for showcasing Filipino culture, but as well as for passing on the patriotic sentiment to the younger generation of Filipino-Americans. 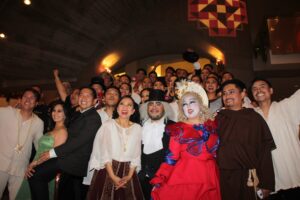 The cast of Noli Me Tangere poses for the fans shortly after the curtain call.

A young man, Leandro Salud, 17, said he was able to relate to the play despite not having read the book Noli Me Tangere, from which the play was adapted, and not having lived in the Philippines for a long time.

“But I was in Manila months ago. I think (the play) it’s still relevant cause it talks about independence.”

Marides Uytiepo, also 17, a family of one the actors, said she understood the messages conveyed in the play as they grew up in the Philippines and felt that a lot of them remain to be true.

“Even if I did not read the book, in the way they portrayed it, I get it. I think Jose Rizal is going to be relevant even in the years to come,’ the young girl added.

Doc Mae, who played the role of Sisa, added that while many of the scenes in the play were depressing, it still managed to bring out a message of hope in the end.

Noli Me Tangere is a well-known play, not only because it was adapted from a novel of national hero Jose Rizal, but also because it was originally created by contemporary Filipino icons namely; national artist Bienvenido Lumbera (libretto), Ryan Cayabyab (music) and Felix “Nonon” Padilla (direction.)

The play first saw light in 1995 at the Tanghalang Aurelio Tolentino of the Cultural Center of the Philippines. Its original cast included Monique Wilson (Maria Clara), Audie Gemora and John Arcilla, alternating as Crisostomo Ibarra, Bernardo Bernardo and Bodjie Pascua as Padre Damaso.

Both the restaging in the US were produced by Teatro Pilipino USA.