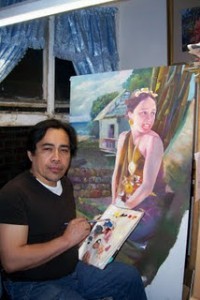 MAT RELOX saw firsthand how the Mangyan natives in Mindoro disintegrated from genuine tribespeople with exotic and distinct lifestyle into just another group of poor and underserved villagers. He knew them. He grew up in their midst. He was, and is always one of them.
Unfortunately, the charming Mangyan life will soon be just an item in Philippine history books; and it will not even be a guarantee that historians can capture the essence of what a true Mangyan life was. It looks like the job belongs to the multi-awarded Mangyan maestro Mat Relox, one of the most celebrated global Filipino contemporary artists. Relox, an exceptionally gifted painter, muralist, and sculptor loads his canvas with a generous strokes of the Mangyan life as he knows it firsthand. Relox remembers, recreates, paints and immortalizes the images of the Mangyan people, their temperament, their lifestyle and original habitat with cunning accuracy.
â€œNapabayaan man ang mga Mangyan, di pinansin ng lipunan ngunit sa trono at pinakamataas na antas ng sining ay aking iwawagayway ang tagumpay ng mga Mangyan na walang kamatayan (The Manyans, as a people, may have been ignored, but I will immortalize them thru the highest form of the art),â€ he said.
And immortalize he did, and continues to do so; in most of his works (over 300 pieces of objet dâ€™arts), the strain of the Reloxâ€™s subject matter waves in and about the milieu of the Manyan life. He is a master of all mediums â€“ pastel, pen and ink, watercolor, and charcoal.
Relox continues with his artistic vision of elevating the Mangyan life through the power of his works, even as he regularly reaps honors in art competitions here and there; the most recent of which was an honorable mention at the Winter Juried Art show in Pittsburgh, California. Relox winning work, â€œSa Piling Ni Inay,â€ is a rendering of a bucolic Mangyan Madonna and Child (14â€x 20 pen and ink on paper). It portrays an amazingly powerful impression of the unbreakable cycle of life. It was chosen along with three others from among the 170 entries. A total of 58 artists participated in the said art show.
Relox is such an enormous talent. Heâ€™s one artist that cannot be ignored; even without trying, his works lay bare to people that the man is a consummate artist. As a testimony to Relox celebrated stature as a painter, the prestigious Phil-Am Expo honored Relox as one of the Most Outstanding Fil-Am Professionals. In that event, Expo-goers had the chance to see first hand the works and shook hands with the maestro.
Humbled by the recognition, Relox was self-effacing in his acceptance speech, saying: â€œSa aming mga artists kapahingahan naming ang maparangalan ng ganito (To artists like me, recognitions like this are greatly-appreciated consolations).
Relox acknowledges that he gets motivated and becomes more passionate about his craft whenever he wins art competitions, gets recognitions, and when big time patrons and patroness of the arts take a second look and buy his paintings. He still can feel the thrill that he had when Imelda Marcos, then the powerful first lady and known for her collections of expensive and beautiful things, took home one of his paintings on display at the Cultural Center of the Philippines gallery.
â€œThat was big deal for me. I felt like I made one little step up the ladder of eminence leading to the exalted pedestal of Juan Luna, Fernando Amorsolo, and Felix Resurreccion Hidalgo ,â€ he said.
Relox, essentially a realist-impressionist, does not have illusions to even get near around the area where the legends dwell. For him, it is enough that he can do whatever he want to do with his God-given artistic talent. He is glad that every now and then he can put up solo art exhibits in Southern California . He is, right now, deep at work on some art pieces that he wanted included in his next one-man art show in Los Angeles .
On Saturday, January 21, Mat, along with top Filipino painter-artists will participate in â€œSining Para Sa Bayan,â€ a fundraiser for the members of the media who were killed or greatly affected by the floods in Northern Mindanao. The artists will display their works in a silent auction at the front facility of the NoyPitz Bar and Restaurant on Brand and Glenoaks in Glendale. A concert featuring marquee names in the Philippine entertainment industry will cap the day-long fundraising activity.