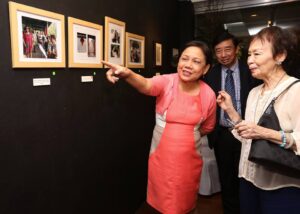 MANILA (Mabuhay) – The Nacionalista Party will support all three vice presidential candidates in its ranks if they all push through with their plans in the 2016 elections, Senator Cynthia Villar told reporters on Tuesday.

Villar is the wife of NP president Manny Villar.

Villar made the remarks after Senator Alan Peter Cayetano announced in Davao City that he would be running for vice president. Senator Antonio Trillanes IV has also expressed his intention to run for the second highest elective post in the country.

She said Cayetano’s decision to declare his vice presidential plans in Davao City was an indication that he would run in tandem with potential presidential candidate Davao City Mayor Rodrigo Duterte.

Villar also said the NP will not enter into a coalition with any larger political party in the 2016 elections, rather, will remain independent.

Villar said her husband had been consulted by the NP members as regards their politicals plans and would support all three particularly in the financial aspect.

She, however, added that the NP would endorse no one.

Each NP member would also be free to support whoever they choose among the three Nacionalista vice presidentiables.

Villar admitted that some NP members would be switching parties but added that it was not a cause for concern since the party was more concerned about the quality of its members rather than the quantity. (MNS)