Obama confident EDCA to be implemented 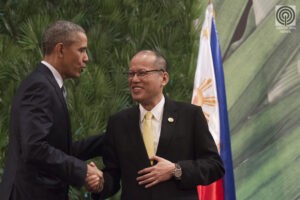 MANILA, Nov 18 (Mabuhay) — The United States reaffirmed its alliance with the Philippines in the just concluded closed-door bilateral talks between US President Barack Obama and President Aquino.

Communications Secretary Sonny Coloma said Obama spoke of the strength of the US and Philippine alliance which would continue to be enhanced through joint exercises and by working with multilateral organizations. Obama emphasized his country’s advocacy on freedom of navigation and freedom of aviation.

In a joint press conference, Obama told reporters of the importance of the enhanced defense cooperation agreement (EDCA) with the Philippines which has been stalled due to a case pending before the Supreme Court.

Obama said he is confident that the EDCA would be implemented effectively, reaffirming the “solid commitment” of the US to “the defense of the Philippines.”

“The broader point is that, as a treaty ally, we have a rock solid commitment to the defense of the Philippines,” he said.

Aquino thanked Obama for assisting the Philippines in strengthening its maritime security capability or the capability to guard its borders with the construction of the National Coast Watch Center.

He also expressed support for US efforts to fight terrorism and in promoting cybersecurity cooperation.

The Philippines spoke of the importance of American support for the implementation of tariff adjustments under the World Trade Organization which is expected to boost trade. Aquino expressed hope that the US will support the Philippines’ desire to be admitted to the Trans-Pacific Partnership or TPP.

He thanked the US for supporting the Philippines’ eligibility for another compact with the Millennium Challenge Corporation.

“[President Aquino] stated that while attainment of PH Intended Nationally Determined Contribution is conditioned on availability of external support, PH has been relentless in its pursuit to address climate change imperatives within its means,” Coloma said in a text message.(MNS)