A promise is a promise: Even during his first term, President Barack Obama has wanted to reform the broken immigration system. Prior to Thursday’s announcement, Obama has been telling America of his plan to overhaul the immigration system as in his remarks on immigration reform at Del Sol High School in Las Vegas back way back in January 2013. (Official White House Photo by Pete Souza)

LOS ANGELES – President Barack Obama drew mixed reactions among Filipino-American immigration advocates last week after he outlined his plan to shield up to 5 million immigrants – including tens of thousands of Filipinos – from deportation.

The National Federation of Filipino American Associations (Naffaa) threw its full support behind Obama’s sweeping immigration reform, saying “his bold decision is a step forward” in fixing a broken immigration system and addressing the plight of undocumented Filipinos.

The Los Angeles-based Pilipino Workers Center (PWC) called it a “partial victory” for Fil-Am immigration advocates who have been pushing for a path to citizenship for undocumented Filipinos.

“It’s the biggest relief granted since 1986, but it’s not a complete victory,” said PWC Director Aquilina Soriano-Versoza, who watched Obama’s televised immigration speech at a gathering of Fil-Am community members at the nonprofit’s LA headquarters.

“I haven’t seen my family in the Philippines for 11 years,” said the 50-year-old healthcare worker who requested anonymity.

But many other undocumented Filipinos – up to tens of thousands – will benefit from the long-awaited reform, said immigration lawyer Arnedo Valera, executive director of the Washington DC-based Migrant Heritage Commission.

Under Obama’s plan, undocumented parents of children born in the United States will be shielded from deportation – potentially benefiting more than 2,000 undocumented Filipinos in the Washington DC area alone, Valera said.

“(Obama’s) executive action is not a cure-all…but an immediate and practical immigration relief to millions of undocumented immigrants,” said Valera.

“It’s not an amnesty and it’s not a path to citizenship,” Allen said. “It’s simply a deferment of possible deportation proceedings. However, it’s a good start for many to come out of the shadows, get a job and provide for their families.” 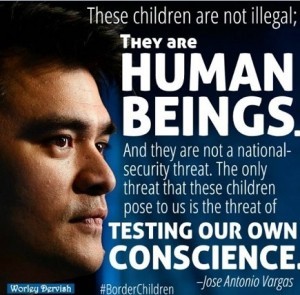 A small relief for Jose Antonio Vargas, who is among the children who were brought here when they were young but are now undocumented, after President Obama expanded the provisions on DACA, the Deferred Action for Childhood Arrivals.

Among those who will benefit from Obama’s reform is Pulitzer prize-winning journalist and immigration activist Jose Antonio Vargas.

Vargas is one of the 270,000 people who would be eligible for relief under the expansion of a 2012 move by Obama to stop deporting people brought illegally to the US as children by their parents.

“Personally, this executive action means a lot to me: I can have temporary status, I can have a work permit, I can travel outside of the country,” said Vargas in his Facebook post.
“The moment I can travel, I will fly to the Philippines and see my Mama, my sister, my brother and relatives. It’s been 21 years.”

But the fight is not over for Vargas.

“Let’s be clear: President Obama’s executive action is temporary, not permanent; it also leaves out millions of people, like undocumented parents (day laborers, farm workers, civil rights leaders) and many LGBT people I know,” he said.

“This action is historic and it’s necessary, but we need to do more.”

The LA-based  Justice for Filipino American Veterans (JFAV) released a statement saying they were disappointed that the plan excluded the 25,000 grandchildren of Filipino World War II veterans who were covered in an immigration bill passed by the Senate several months ago. 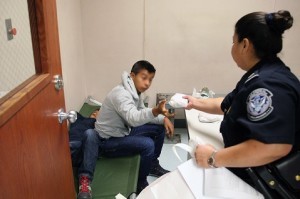 CBP Processing Unaccompanied Children:South Texas Border – U.S. Customs and Border Protection provide assistance to unaccompanied alien children after they have crossed the border into the United States. Seen here during processing a Custom’s Field Officer provides food to unaccompanied children. Although the new executive action taken by President Obama would grant work permits to children who are undocumented, they only cover those who have been brought here January 1, 2010. Photo provided by: Eddie Perez

There are 270,000 undocumented Filipinos in the US, according to the US Citizenship and Immigration Services (USCIS), but other estimates range from 500,000 to 1 million.

Naffaa plans to hold educational forums to educate the community the Obama reform and its impact on undocumented Filipinos.

PWC will conduct an outreach to undocumented Filipinos who will potentially benefit from the Obama plan and offer them low-cost legal assistance. They will also provide no-interest loans under its “Paluwagan” program to cover application fees.