Obama: We have ‘rock solid commitment’ to PHL defense 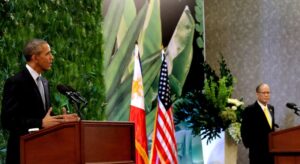 United States of America President Barack Obama delivers his remarks during the joint press statement with President Benigno S. Aquino III after the bilateral meeting at the Sofitel Philippine Plaza Hotel on Wednesday (November 18), at the sidelines of the APEC Economic Leaders’ Meeting. (MNS photo)

MANILA (Mabuhay) – President Barack Obama on Wednesday said the US government has a “rock solid commitment to the defense of the Philippines” as the validity of the Enhanced Defense Cooperation Agreement (EDCA) hangs before the Supreme Court (SC).

Obama faced the media after a one-hour bilateral meeting with President Benigno Aquino III at the sidelines of the Asia-Pacific Economic Cooperation (APEC) Summit.

“With respect to Enhanced Defense Cooperation Agreement, obviously, the Philippines has to go through its process in the Supreme Court review. But we are confident that it is going to get done and we are going to be able to implement effectively the provisions and the ideas that have come forward during the course of these discussions,” said Obama.

The SC has deferred at least twice its ruling on the petitions questioning the Philippines’ EDCA with the US.

Under EDCA, the US will be allowed to build structures, store as well as preposition weapons, defense supplies and materiel, station troops, civilian personnel and defense contractors, transit and station vehicles, vessels, and aircraft for a period of 10 years.

“The broader point is that, as a treaty ally, we have a rock solid commitment to the defense of the Philippines,” said 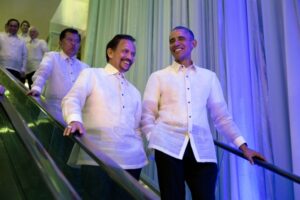 “And part of our goal is to continue to help our treaty partners build up capacity, to make sure that the architecture of both defense work, but also humanitarian work, and other important activities in the region are coordinated more effectively, and we think that the Enhanced Defense Cooperation Agreement is going to help us do that,” he added.(MNS)

‘The future always follows’ by Jannelle So