More than a year after Super Typhoon Yolanda unleashed her fury on residents of coastal towns along its path in the Visayan area of the Philippines, many victims still grapple with the reality of not being able to return to normal living.

Dozens of countries and well-meaning organizations around the world came to the rescue as soon as the weather cleared up to help in the massive effort in the aftermath of the typhoon that claimed the lives of more 6,000 people with many more still missing.

Driven by media coverage of one of the most powerful storms in recorded history, the international community mobilized on a historic scale to help survivors of Yolanda.

Credit it to the extraordinary resilience of the Filipinos though, more than a year after the devastation, the flattened areas are slowly being rebuilt brick by brick, stone by stone and many lives have been permanently scarred by the calamity.

Many sectors are still on the site helping out the victims.

The Yolanda aftermath has become a galvanizing tragedy that moved people even in the entertainment world to pitch in to help through many fundraising events. 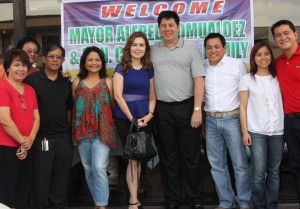 “Love for Tacloban”: As the massive rehabilitation efforts for the victims of Typhoon Yolanda in Tacloban City continues, local provincial executives of the province will be joining the OC Fil-Am Chamber of Commerce and GMA Kapuso Foundation in raising the needed funds for the effort. Mayor Romualdez and his wife, Councilor Cristinas Romualdez, were in the Los Angeles area recently to drum up support from their fellow Taclobanons at a fundraiser.

On March 14, at the Radisson Hotel in Uptown Whittier, the Filipino American Chamber of Commerce, GMA Kapuso Foundation and the provincial executives of Leyte province, one of the hardest hit coastal areas of Typhoon Yolanda, are joining efforts to appeal to the attendees to dig deeper in their hearts to help the victims  of the calamity.

Tacloban Mayor Alfred Romualdez and his wife, Council-member Cristina Gonzalez, will be drumming up for more compassion with Tacloban City “still needing the help with more survivors still living in tents more than a year after Haiyan.”

It will be recalled that Alred and Cristina had recently met with the Taclobanons in Los Angeles at Josephine Cerritos to appeal for their help for their townmates.  The duo is expected to again  rally them in supporting the massive rehabilitation effort.

FACCOC president Elena Lapid-Salonga, who shares the passion for helping the typhoon victims, has appealed to Fil-Am entrepreneurs at the recent Small Business Summit of Chamber at the Bowers Museum in Santa Ana in Orange County to help in the fundraising project as part of the community outreach of the association, although this is not the first time that the organization is joining in the effort to rehabilitate the victims of the calamity. or tickets to the fundraiser, please contact Maarcella (949)701-1029/ Elena (626) 327-1907 or log in to www.faccoc.org.

Espina renews call for return of PNP-SAF’s firearms, other items