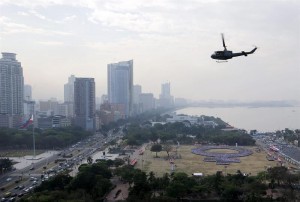 A helicopter hovers above a large human women symbol at the Quirino Grandstand on the celebration International Women’s Day in Manila, the Philippines, 08 March 2014. According to the Philippine Commission on Women, more than 10,000 participants join the human formation to set a new Guinness World Record as the ‘Biggest human formation on women’s symbol’. (MNS photo)

MANILA (Mabuhay) – Executive Secretary Paquito N. Ochoa Jr. on Saturday lauded all the women in areas affected by super typhoons and earthquake for their contribution to help the country rise above the challenges brought about by a series of calamities last year.

On the occasion of the National Women’s Month celebration, Ochoa expressed his admiration to these women who serve “as pillars of strength and solidarity in their respective families, communities, and our nation.”

The Executive Secretary said the capacity of Filipino women to endure and prevail under demanding circumstances embodies women empowerment.

“Heroines all, women in affected areas, though victims themselves, have inspired us with their efforts to keep their families together, extending assistance to others as volunteers in rescue and rehabilitation efforts, and ably performing their duties as leaders in their respective communities,” Ochoa said.

Ochoa also took the opportunity to announce that the Philippines will begin this month the assessment of the progress of its commitments under the Beijing Platform for Action (BPfA) of 1995 in preparation for the 20-year global review next year.

The BPfA is an international accord of women’s rights created during the Fourth World Conference on Women of the United Nation in Beijing in 1995, which has the backing of some 189 countries including the Philippines.

The BPfA includes key areas of concern needing action such as women and poverty, violence against women, and access to power and decision-making.

According to Ochoa, the Philippine report will be crafted by stakeholders in the government and non-government sectors and will be tackled during the Women’s Consultative Conference this month.

“The Philippine experience can very well be a major contribution to this review as the world looks at more opportunities for gender equality and empowerment, and for broadening advocacy in the promotion and protection of women’s rights after 2015,” Ochoa said. (MNS)

Health is Wealth at the 11th Annual Historic Filipinotown Festival