TFC@theMovies brings the most successful Filipino indie film to date to 33 theatres in the U.S. starting March 27

“There are two things that define the Filipino romantic comedy: ‘kilig’ and manufactured conflict. The former is the fuel that makes the engine run, the ephemeral feeling that fans of the genre will chase for the rest of their lives. The latter is a necessary detour to make the formula work; some strange contrivance that pushes the characters apart so they can get together in the end for more kilig. What is strange and ultimately so memorable about That Thing Called Tadhana is that it eschews both. Even with a premise that feels unlikely, it builds a relationship that feels so much closer to what people experience in real life.” – Philbert Ortiz Dy, ClickTheCity.com 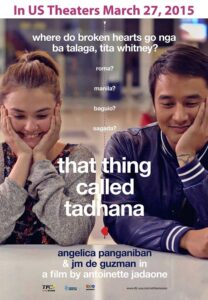 REDWOOD SHORES, CA – For independent film writer-director Antoinette Jadaone, Cinema One Originals’ That Thing Called Tadhana is her “dream project” and described it as “more than 10 years’ worth of love stories, heartaches, heartbreaks, bitterness, and acceptance.”

That dream won the prestigious 2014 Don Carlos Palanca Memorial Awards for Literature for Jadaone, Php 2 million budget granted by Cinema One Originals to produce the movie, sold-out screenings at the 2014 Cinema One Originals Film Festival late last year, Best Actress Awards for lead actress Angelica Panganiban at said filmfest and at the 13th Gawad Tanglaw (tied with Nora Aunor for “Dementia”), and Audience Choice and Champion Bughaw for Full-Length Feature awards aside from being nominated as Best Picture also at the 2014 Cinema One Originals filmfest.
But what went beyond Jadaone’s dreams was that her Php 2-million independent film grossed over Php 120 million in the Philippines in less than three weeks, making it the most successful independent Filipino film release yet. Moreover, this little-film-that-could will now be screened internationally through TFC@theMovies which will bring it to 33 theaters in the U.S. starting this Friday, March 27.

Starring Panganiban and JM de Guzman as Mace Castillo and Anthony Lagdameo, respectively, and joined by Joem Bascon, the film – which takes viewers from a chance meeting between Mace and Anthony at the airport in Rome to their impromptu adventure to Baguio and Sagada as they converse about broken hearts – has become so popular among moviegoers that a 4-day “Tadhana Tour” of Baguio and Sagada was even offered by a travel group.

“What starts out as an innocent gesture of kindness, ends up as a road trip across Luzon. Like ‘Before Sunrise’, the film is a simple observation of two conversing individuals. There is no elaborate romantic setup, and no arbitrary goal. But in the latest film by writer-director Antoinette Jadaone, the story simply relies on words, time and two people.” – Zig Marasigan, Rappler.com

“The movie avoids the overly melodramatic scenes and loud confrontation scenes that have long been the norm in dramatic movies. It also avoids being just a Filipinized version of all the nice foreign rom-coms that have come our way. The acting is natural, the situations not forced. The ending, provocative then smart.” – Mari-Ann Santos, pep.ph

“The film has the right blend of romance and comedy laced with realistic, down-to-earth, and relatable dialogue. Angelica and JM deliver superb performances as they ignite and arouse the sensibilities of every moviegoer with their palpable on-screen chemistry.” – Isah V. Red, Manila Standard Today

“Another thing that it does right is focusing on these 20-somethings’ lives; they’re somewhat jaded, their early dreams faded or replaced by demands of reality. For all its spotlight on dreary life and treacherous love, the film has redeeming optimism. It fits all that in one talky, painful catharsis of a movie, and for that, those who relate to it have much to be thankful for.” – Oliver M. Pulumbarit, Inquirer.net

“And the greatest lesson of ‘Tadhana; is that we should not run away from heartbreaks because in the long run, it would make us better. Just look at Direk Antoinette. Not only did she discovered her capability to write, she also produced a film that would help broken hearted people recover, or at the very least, laugh.” – Carla Bianca V. Ravanes, The Manila Times

“A dream came true for an industry colleague, Antoinette Jadaone, through That Thing Called Tadhana, and the spirit of that dream, which is hope in the face of the challenges of reality, is what makes this movie very special,” said ABS-CBN Global Head of Theatricals and acclaimed film, TV and concert stage director John-D Lazatin. “This film is a perfect offering for spring in North America which is a season of change and a time for new beginnings.”

For more information including the theater listings in the US for That Thing Called Tadhana,visit http://www.tfc-usa.com/that-thing-called-tadhana/

ABS-CBN International was founded in April 1994 to be of service to all Filipinos. With the launch of The Filipino Channel (TFC), the company became the first and most successful Filipino content distribution company in the U.S. The company offers telecommunication, retail, theatricals, money remittance and cargo services, online audio and video streaming, IPTV, On Demand, along with philanthropic support for Filipinos and the communities they now call home. Based in Redwood City, CA, ABS-CBN International is a subsidiary of ABS-CBN Corporation, the Philippines’ largest entertainment and broadcasting company, through ABS-CBN Corporation’s wholly-owned subsidiary, ABS-CBN Global Hungary Kft. For more information, visit www.tfc-usa.com.