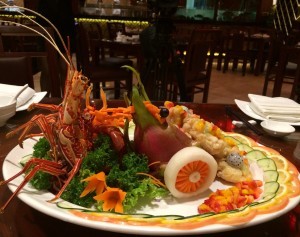 Order the lobster dish with sweet sauce made up of diced mangoes and strawberries.

MANILA – They sell 1,200 pieces of hotdogs… On a slow day.
“On good days, we average a little over 2,000,” said Chef Benedicto “Ben” Bernardo of Franks Craft Beers at Resorts World Manila (RWM) where one can enjoy unique hotdog flavors such as the Chicken Inasal, the Braised Beef and the intriguing Chicken Adobo.

Instead of the usual deep-fried-in-oil hotdogs, the delicious sausages served at Franks are cooked in water, resulting in a soft bite that melts in your mouth, as the flavors fill your palette.
“It took us many meetings with our suppliers to make sure we get the flavors we want. Everything is meticulously prepared and smoked, for the flavors to come out,” said Chef Ben, adding that the menu was created by RWM’s Chief Hotel Operations Officer W. Scott Sibley, also an accomplished chef who has published a cook book.

“The chili is my personal recipe,” said Scott; and I personally tried it. It looks like your average chili, nothing fancy. But a few seconds after you put a bite in your mouth, the meticulously calculated spice kicks in and proceeds to tickle your taste buds.

For four days now, I have been enjoying a gastronomic adventure here at RWM, shooting a culinary tour of the first ever integrated resort in the Philippines, stopping by the many impressive restaurants and chatting with very talented chefs.

Chef David Chu of Passion Chinese Restaurant trained in Hong Kong for many years, mastering the art of Chinese cooking – dim sum, stir fry dishes, and more. There are many choices; but whatever you do, don’t miss the Xian garoupa, a tasty dish of fried lapu-lapu in a light, sweet and sour sauce with chunks of pomelo.

Xian garoupa, a tasty dish of fried lapu-lapu in a light, sweet and sour sauce with chunks of pomelo.

Happy 9, the Asian restaurant inside the exclusive Genting Club, is Master Chef David Choo’s turf. The VIP chef has studied Western cooking at Le Cordon Bleu in France; and mastered Asian cooking under the tutelage of his uncle in Malaysia. He says his educational and experiences has enabled him to prepare dishes for prime ministers, sultans, princes and other very high profile personalities who have very picky taste buds. For them he says, he prepares food that are not only delicious; but also striking to look at. And he achieves this “wow”-effect with colors. The result are works of art that are too beautiful, one momentarily forgets that it’s edible. Order the lobster dish with sweet sauce made up of diced mangoes and strawberries.

Filipino Chef Antonio Ablay has studied Japanese cuisine for years. At Ginzadon, he and his team serves only the freshest sashimi – hamachi from Japan, salmon from Norway; and tuna from General Santos, Philippines. Not-to-miss for me is the uni from Palawan.

And not to be missed at RWM is the fine dining French restaurant, Impressions, where French Chef Cyrille Soenen had me at foie gras.
In-depth features for each of the restaurants and the chefs will be aired in RWM’s Good News segments on “Kababayan Today.” Prepare to feast your eyes on delectable dishes while discovering the stories behind the kitchen.

And if you notice a slightly bigger me on TV, you know why.

Jannelle So is Host/Producer of “Kababayan Today” that airs daily at 4:00pm on KSCITV-LA18; and syndicated in Hawaii on weekdays at 3:30pm on Kiku. Catch previous programs at www.youtube.com/kababayanla18. Like her on Facebook: www.facebook.com/JannelleSoOFFICIAL. Follow her on Twitter: www.twitter.com/JannelleSo.