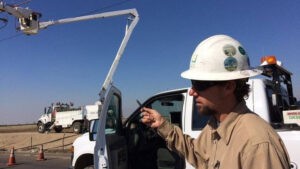 Matt Duma wasn’t dressed to impress, but he left quite the impression anyway.

Pajamas, slippers and all.

The Southern California Edison transmission line foreman’s quick thinking played a pivotal role in a car-hit-utility-pole accident late Monday in Visalia. Duma’s actions may have saved a man’s life, and the first responders couldn’t have been more appreciative.

“The action of the off-duty Edison employee were instrumental to the outcome of the incident,” Visalia Fire Department battalion chief Danny Wristen told the Fresno Bee.

Duma, however, believes he was just doing his job.

“I don’t think I did anything heroic. I did my job,” said Duma, an 11-year veteran of SCE. “It’s no different than a firefighter going to rescue someone in a burning house or a cop doing his job. I respond to a wire down and I know how to take care of it.”

Another member of the fire department who was there, engineer Shane Yoder, begs to differ.

“He made an appearance at some point real quick after we were there,” said Yoder. “Definitely appreciate his help and it sped the process up quite a bit rather than having to wait for the [SCE truck] to get on the scene. It was great that someone was there to assist us.”

The whole episode began for Duma, who had gone to bed about 10, when he was awakened by a loud crash about10:50 p.m. accompanied by a power outage. He had no doubts about what had happened.

So, in his pajamas and slippers, he rushed to his car and drove to the scene on Riggins Avenue.

There were power lines hovering and a 12-kilovolt transformer a foot away from the wrecked car with a man trapped inside. Duma knew he could help, but a Visalia police officer thought differently of the sleepwear-clad foreman, who in his haste had left his ID at home.

After briefly trying to convince the officer he was an electrical professional, Duma “remembered I’ve got my work phone on me, so I showed the officer pictures of me working with my crew” and was waved in.

Once there, he called Rector substation operators Bryan Cheney and Brandt Chavez again — he had already called them on the way there — and had them de-energize the 12- and 66-kilovolt power lines.

The fire department then, much quicker than usual, safely rescued the trapped driver, who Duma said began moving right about the time the scene was de-energized.

“As much as we want to assist the victim, we’re concerned about everyone else being electrocuted,” said Yoder. “But [Duma] talked with authority, kept us updated and notified us they had shut the power off and we were able to extricate the victim.

“We highly respect you guys working with electricity. We can handle getting them out of the car and everything else, but I must say the fire department is very respectful of electricity and the guys that work with it.”

Not to mention ecstatic with Duma’s quick assistance. However, he was gone as soon as he arrived.

But if the first responders had returned to the scene a short time later, they’d have found Duma – who had returned home to don his lineman’s uniform – back on his regular job,repairing the pole and restoring power.

And, also wondering what all the fuss is about.

“I’ve got text messages, I’ve got stuff about being a hero. I’m not a hero, I’m just a lineman, man. This is what I do,” said Duma. “I’m just trying to help [the victim], the firemen, the police, the substation, the troubleman. That’s our job, that’s what we do for a living.”

His supervisor, Stan Hack, SCE manager of the San Joaquin Grid, echoed Duma but delivered some praise too.

“Matt does the right things for the right reasons,” he said. “It was pretty amazing the quick actions he took. He reached hero status that night. But, if you ask him, he’ll say he was just doing his job.”

Palace: PNP’s heightened alert not due to ‘bomb plot’ 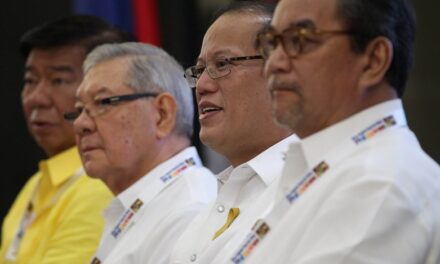