Photographer/artist, Hanae Mae “Mimi” Blanco-Peters’ photo exhibit called “Off the Beaten Path” is now open to the public for free viewing at the American Institute of Architects Building on Wilshire Boulevard, from September 1-30, 2014. There will be an artist’s reception scheduled on Saturday, September 13, 2014, 6:00 – 8:00 pm.

Mimi was born and raised in Manila, though her parents (mom, Ophelia Quevedo Verano and dad, Benedicto Blanco) were both from Paoay, Ilocos Norte.

A pharmacist by profession, Mimi’s creative desire was sparked by her interest in photography in her early 30’s.. She is a self-taught photographer who ventured into capturing “off the beaten path,” abandoned structures, showcasing its  “urban decay, while at the same time admiring its beauty which was most often overlooked.”

Together, Mimi and her husband of five years, Jason Peters would go on weekend road trips, from Palm Springs to Route 66 to Barstow, exploring unusual places to go to, looking for interesting, “abandoned buildings off the side of quiet highways, where there’s nothing but wind and dirt kicking up on your face.:”

The “compositions she shoots are focused mainly on what remains as a standing structure, that evokes unique architectural charm, depicting its change over time and a story to tell.” For Mimi, it wasn’t just finding abandoned buildings but finding structures that have “texture, lighting and a composition.” It also takes “planning and mapping locations, particularly with unfamiliar distant environments” and areas which were mostly “off the beaten path.” 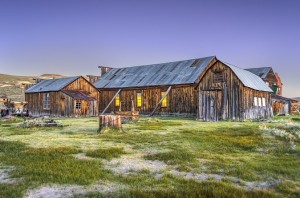 Above photo is among Mimi Pater’s collection called “BODIE AT NIGHT,” shot in Bodie, Ca., a mining ghost town close to Yosemite. It was declared a state park in 1962 and is now being maintained in a state of “arrested decay.” The town’s heyday was during the gold rush in the 1880’s.

She specializes on the type of photographs called “light painting.,” where photos are “ taken over a few minutes of an exposure, while highlighting parts of buildings or structures with either white or colored flashlight to give the illusion that the building or structures are lit up, when they’re really not., much like a motel sign being lit up, while in reality, it was just shot in darkness with no lights on.” In order to capture the right shot, some of the photographs in her collection took all day and “time is of the essence for the right moment to shoot.”

For those interested to view Mimi Peter’s exhibits and photograph collections, the AIA Building is located at: 3780 WIlshire Blvd., Los Angeles, CA.  Exhibition hours are: 9:00 am to 4:00 pm; closed on weekends.