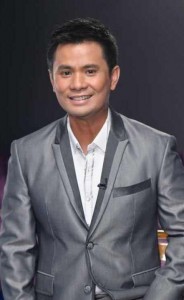 Alcasid, who has been with GMA-7 for 18 years, reportedly met with GMA executives last June and last week to inform them about his decision.

In a statement posted on its news website Wednesday, GMA Network confirmed that Alcasid is leaving the station.

“As Ogie Alcasid moves on to explore new grounds, GMA Network, his home for almost two decades, wishes him all the best. We thank him for being a part of the Network’s success all these years,” GMA Network said.

“His achievements as a singer, songwriter, comedian, host and actor make Ogie the icon that he is now. And the Kapuso Network is proud to have been with him throughout this journey,” the network said.

Alcasid is one of the popular comedians of GMA Network, especially in its weekly comedy show, Bubble Gang.

Alcasid said he was torn between his loyalty to GMA Network and his close ties with his wedding sponsor, Manny Pangilinan, chair of TV5. (MNS)

Why Angeline almost turned her back on singing

Lovi taking it slow with Rocco