Oliver was invited over a year ago by sponsor Palm Springs Life magazine to be the featured “Designer of the Week” at El Paseo, a fashion event considered the most prestigious in all of California.Â El Paseo is the street known as “the Rodeo Drive” of Palm Springs. 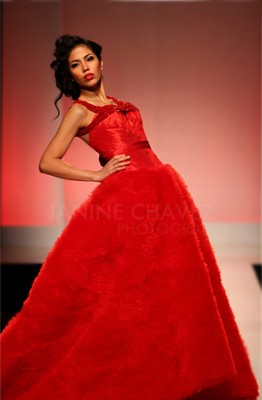 Under the El Paseo tent, larger than any at New Yorkâ€™s Bryant Park, Oliver showcased 68 pieces before a standing-room-only 600+ crowd.Â  When the lights went dark, Palm Springs socialites heard old news reels about “thousands of pairs of shoes” followed by Imelda Marcos’ voice discussing her concept of beauty.Â  As members in the audience smiled, a thunderous symphonic piece heralded the start of his Spring-Summer 2011 collection.

Oliver’s special muse, Philippine supermodel Tutay Maristela, stepped out and commanded the crowd’s attention as she emoted alone on the runway in the gown that won the Eco Sustainable Award last October when Oliver represented the Philippines in the Bahamas.Â  Tutay paused in the middle of the runway before the first song began.

It was a mostly American audience, but the Filipinos in attendance got goose bumps when they realized Oliver chose Sylvia La Torre singing “Galawgaw” to open his show.Â  Boom Dayupay (from Kulay) had mixed a faster version with a beat so Oliver could use the Tagalog song. Â  It was particularly fitting as Sylvia La Torre’s granddaughter, Hollywood actress Anna Maria Perez De Tagle (“Camp Rock,” “Fame,” and “Hannah Montana”), was seated in the front row. 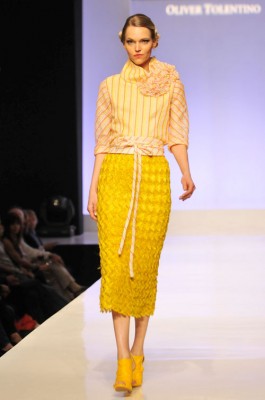 It was clear Oliver had insisted that the Philippines also would be on display for this audience, which included international designer Trina Turk. Oliverâ€™s entire collection was inspired by Hollywood circa 1950s-1960s, and his ready-to-wear segment was 20 sophisticated looks of shorts, pedal pushers, pants, over-blouses, and boleros in bright spring colors comprised mostly of indigenous fabrics piÃ±a, abaca, and raw silk cocoon.

Five traditional wedding gowns closed the show.Â  The bridal pieces were made of French lace, duchess satin, tulle, and native piÃ±a and abaca.Â  Tutay dramatically modeled the final gown, sitting down in the middle of a mountain of tulle for effect. 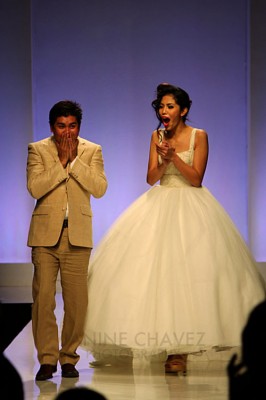 When Oliver appeared for the final walk-out, the crowd rose to its feet in a rare standing ovation for such a discriminating, fashion-knowledgeable audience.Â  Wearing a cream abaca fiber jacket, Oliver appeared surprised and moved by the sustained applause.Â  He escorted Tutay to the end of the runway and took a bow not just for himself but for his native Philippines.

Besides Trina Turk, Anna Maria Perez de Tagle, and fashion editors and journalists, guests in attendance included Los Angeles Philippine Consul General Mary Jo Aragon and Mr. T. Baker Smith and his wife Lisa.Â  Mr. Smith is a partner with Accenture Consulting, the largest foreign employer in the Philippines.Â  The Smiths flew in from New York where they have hosted Oliverâ€™s trunk shows for Manhattan socialites. Oliverâ€™s show was followed by an after-party in his honor at the Ace Hotel in Palm Springs.Â  Palm Springs Life will feature him and his show in its upcoming issue.