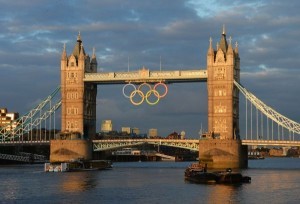 A general view of the Tower Bridge decorated with the Olympic ring symbol, in central London, on July 15, 2012, as Britain prepares for the beginning of the Olympic Games. The London 2012 Olympic Games will begin on July 27, 2012. Â©TOPSHOTS/AFP PHOTO/MIGUEL MEDINA

(LONDON-AFP) – The London Olympics are Britain’s best chance to sell itself for more than 150 years, a government official declared on Wednesday.

Speaking nine days before the Games open, Alan Collins, the managing director for Olympic Legacy at UK Trade and Investment, said he was confident they would help Britain attract Â£6.0 billion (7.6 billion euros, $9.4 billion) in investment by 2016.

“This is the best opportunity since the Great Exhibition of 1851 to show off Britain,” Collins told a press conference.

The 1851 Great Exhibition at Crystal Palace in London was the first in a series of World’s Fair exhibitions of culture and industry that were popular in the 19th century and early 20th century.

London estimates that a campaign of tourism to promote Britain built around last year’s royal wedding, Queen Elizabeth II’s diamond jubilee this year and the Olympics will attract 4.6 million extra visitors between 2011 and 2015.

But Britain’s tourism chief hit out at the country’s “utter obsession” with the weather, saying foreign visitors do not come to the United Kingdom for beach holidays.

Sandie Dawe, chief executive of Visit Britain, brushed off concerns that weeks of heavy rain would deter visitors to the Games.

“It is only the Brits that have a complete and utter obsession with our weather,” she told the press conference.

“Frankly, people do not come here to lie on a beach. That is not our offer.

“They come for culture, sightseeing, and they come all times of the year.”

Dawe said the greenness of Britain was “balm to the eyes” of visitors from the Middle East.

However, she added: “Anyway, the sun is going to come out — have you seen the long-range weather forecast? It will.”

Recession-hit Britain felt a mini-boost from the Olympics on Wednesday when figures showed the unemployment rate fell to 8.1 percent in May from 8.2 percent in April, as the job market was boosted by temporary hiring for the Games.

Howard Archer, chief European economist at IHS Global Insight research group, said the “imminent holding of the Olympic Games is currently providing a boost to employment,” in addition to other factors.