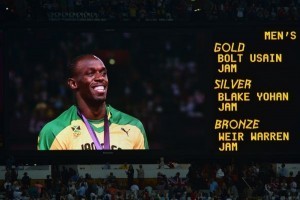 A giant screen shows a picture of Jamaica’s gold medalist Usain Bolt celebrating on the podium of the men’s 200m final during the London 2012 Olympic Games on August 9, 2012.
Â©AFP PHOTO / GABRIEL BOUYS

(NEW YORK-AFP) – The London Olympics had more viewers than any other event in US television history, broadcaster NBC said.

Despite being widely lambasted for its scheduling choices, NBC’s coverage proved a massive hit.

With 219.4 million American viewers on NBCUniversal networks, it set the record as the most-watched event in US television history, surpassing the 2008 Beijing Olympics (215 million), according to data from Nielsen.

NBC, which had sole rights in the United States, broadcast 5,535 hours of the games across its channels, far more than the nearly 2,000 hours aired from Beijing.

“The London Olympics was a wonderful 17 days for NBCUniversal, exceeding all our expectations in viewership, digital consumption and revenue,” Steve Burke, the CEO of NBCUniversal, said in a statement Monday.

The Year In NFL Concussions (So Far): A Horrifying Video Compilation [Video]