‘One Malaysia,’ an economic model for a diverse nation 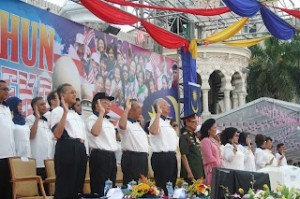 (Note: The author who became a full-fledged journalist right after college is a witness and at the same a victim of Philippines’ corrupt society, whose worsening economic conditions back then forced him to abandon his country to work as a reporter abroad – just like the 10 million Filipinos who are employed overseas – and has been an outsider since 1991. Last month, the author visited Malaysia, then an inferior country compared to the Philippines a few decades ago, but now an economic power in Southeast Asia. The following article is the author’s attempt to present contrasting features of the neighboring countries as he tries to persuade the Philippine government to review its current policies on population control and federalism, and perhaps even emulate its Malaysian cousins, who welcome 22 million tourists a year compared to Philippines’ only four million foreign visitors.)

As a Filipino, I’ve always heard that in the 50s, a few years after the Second World War, the Philippines was one of the most progressive countries in Asia and was the leading country in the southeast Asian region until the 60s. When I was a kid, there was even an ad on television that said Philippine Airlines was “Asia’s first airline.” In fact the Philippines’ flag carrier still promotes that title sans the shining luster it used to enjoy. Well, we were illustrious, until Ferdinand Marcos became president in 1966 and then the country went into a downward spiral. Some 20 years later into his dictatorship, the Philippines became the “Sick Man of Asia.”

This month, the Philippines will remember that fateful day, September 21, 1972, when Marcos declared martial law. If not for the EDSA uprising in 1986, in which I was very much involved being a student activist at that time and a scribe for a college paper, the “Sick Man of Asia” may have been in a worse condition, no thanks to the plunder that the Marcoses and his cronies did to their own country.

Now, 26 years after the EDSA revolt, the Philippines has yet to fully recover. But our leader, current President Benigno “Noynoy” Aquino III, whose both parents suffered a lot during the dictatorship – his father, Sen. Benigno “Ninoy” Aquino was assassinated, while his reluctant mother ran against Marcos and became president after the dictator was ousted (she survived seven coup attempts during her six-year presidency!) – may be looking at a country that is ready to face its economic challenges and hopefully be able to recover some of its lost prestige of the glorious past.

Back in 2009, I had the privilege of returning to the Philippines. Admittedly, a lot has changed…at least in Metro Manila. There have been signs of progress, construction was flourishing and many of our kababayans were employed as outsource service providers in companies more commonly known as call centers, and even leads India in this sector. Personally, I felt good…momentarily.

Just last month, however, I was fortunate enough to have been invited by the Malaysian government to take part and chronicle their 55th Independence Day celebration that took place last August 31. As a Filipino journalist who has written several stories about the Philippines’ transition from a dictatorship to a democracy, seeing our Malaysian neighbors celebrate their independence day was an event I will never forget.

While we in the Philippines have yet to cultivate a full sense of national pride mainly perhaps because of our parochial differences, the Malaysians are marching towards greater heights, in spite of what I would consider a fractured multi-ethnic union of different cultures, religions and backgrounds. On the contrary, our neighbors down south feed on their own diversity, using their own creativity and competitiveness to become an envy of other southeast Asian economies, the Philippines included as it tries to make peace with two insurgent groups. Despite a majority of Malaysians being Muslims, rarely if none were news about terror threats, unlike in Indonesia where there have been acts of violence against innocent civilians.

Blessed with its own crude oil, Malaysia is the only country in Southeast Asia to produce its own cars, Proton and Perodua. The country is also among the world’s top manufacturing hubs for semi-conductors and other electronic components, employing hundreds of thousands of people, including foreign labor, many of whom are, you guessed it, Filipinos.

Malaysia’s infrastructure is also among the most developed in Asia, according to Wikipedia. In one of our tours, we got the chance to view the new city of Putrajaya, located some 15 miles outside of Kuala Lumpur, in a well-planned urban area where new government buildings are located. The city is beautifully landscaped with a massive man-made lake dotted with captivating bridges – there are nine spans around the city – because of their modern architectural design.

In addition, Malaysia’s railway systems are one of the best in the world. Its KLIA Ekspres also allows international airline passengers to check in their luggage at the train station, therefore no long queues, and enjoy a convenient high-speed but quiet half-hour ride from Kuala Lumpur to the airport, and with free wifi connections.

Kuala Lumpur of course is home to the tallest twin towers in the world – the Petronas Towers – each having 88 floors and stands 1,483 feet high into the sky. These buildings of stainless steel alone are a testament of Malaysia’s solid growth, whose economy is third largest in southeast Asia and is ranked 28th in the world vis-à-vis the purchasing power of its 29 million people.

Speaking of population, there again lies my envy. While the Philippines has 90 million inhabitants – 7th in Asia and 12th largest in the world – Malaysia’s smaller population means more social services for its people. In my one week stay, I’ve tried my best to look for squatters and beggars in the streets of Kuala Lumpur, which were very clean by the way, to no avail. Contrast that to Manila’s large squatter population, which often than not, results in violent confrontations when the government tries to relocate them away from the metropolis.

Malaysia has 13 federated states and three federal territories, which just like in the U.S. is a form of government that the Philippines I think should also greatly consider to let regions become more self-sufficient and compete with one another.

Comprised of 60 percent Muslims, other religions are practiced freely in Malaysia, including Buddhism and Hinduism along with a variety of Christian denominations. The Philippines, meanwhile, has more than 80 percent who are Roman Catholic faithfuls, whose church leaders oppose the use of contraceptives, but that is another issue altogether. The Philippines also is the lone country in the world that doesn’t allow divorce.

During their Independence Day celebration, most, if not all, buildings and homes displayed the Malaysian flag. Among those who proudly paraded in the Merdeka Square were local Malaysian folks, some of whom drove their teksis (taxi) that carry the Proton brand, which much to my own chagrin, were symbols of how far Malaysia has gone in terms of progress compared to where I was born. I had goose bumps and my eyes welled up upon seeing them celebrate their 55th year as a free sovereign Malaysia with great pride. I wished the Philippines would emulate the same kind of self-respect that the descendants of our own forefathers possess, a truly united nation.

As they passed by the grandstand during the parade, those who took part waved proudly to their king and queen and to their government officials who, except for the royal couple, were wearing one type of uniform, both men and women: black trousers with a blue-collared white polo shirt emblazoned with the number “1” on the upper left chest signifying unity and “One Malaysia.”