One-off BMW aims to be the toast of Oktoberfest

Come to Pacific BMW and be merry in a new car 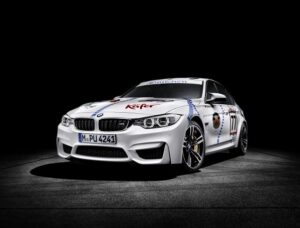 (Relaxnews) – Despite being incredibly busy outlining new technologies, innovations and models at this year’s Frankfurt motor show, BMW’s designers have still found time to put together the BMW M3 “Münchner Wirte,” a special model to mark the start of Munich’s world-famous beer festival, which gets underway on Saturday.

Inspired by BMW’s ties to both Munich and motorsport, the special car’s hand-painted external finish incorporates visual elements including Munich’s Olympic Stadium, BMW’s headquarters and the Wiesn-Schänke beer tent at the Oktoberfest event itself.

The flowing blue-on-white mural is the work of Walter Maurer who, over three decades ago, was the creative mind behind the livery on the BMW M1 Procar racer that competed at a number of high-profile competitions including Le Mans. “Although the two cars are very different, it was surprisingly straightforward to carry over the design from the two-door BMW M1 racer to the four-door BMW M3 Sedan,” said Maurer.

The “Münchner Wirte” is the second special ‘M’ car that BMW has showcased this week. Over in Frankfurt where it has been detailing its plans for greener cars with undiluted driving dynamics, it caught motoring journalists off guard by also showing off the M6 Competition Edition.

The Standard M6 coupé is BMW’s performance flagship, and is capable of catapulting its owner and up to four passengers plus luggage from standstill to 100km/h in 4.2 seconds and on to an electronically limited top speed of 250km/h. And rather than simply being a muscle car, the M6 is just as capable on twisty, turning roads as it is on a drag strip.

However, the new Competition Edition, the elements of which can be retrofitted to an existing 2015-model year M6, takes the 4.4-liter twin turbo engine’s power up to 600hp from the standard 560hp and that top speed up to 305km/h. To make even more of the extra power, a number of exterior components have been reworked in carbon fiber and there are a number of subtle aerodynamic tweaks, too.

Inside, the cabin is kitted out in fine-grain Merino leather while the gear lever trim panels and even the steering wheel spokes are formed from carbon fiber. A head up display is standard to ensure the driver can keep both eyes firmly on the road and the final touch is the choice of a Harman Kardon or a Bang & Olufsen sound system.

The M6 Competition Edition option will be available to order as an M6 specification from late September and prices will start at €17,000 on top of the price of the standard car.

As for the BMW M3 “Münchner Wirte” it will be on show from September 19 until October 4 at the BMW Welt concession within Oktoberfest.