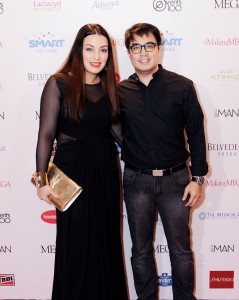 Bondoc confirmed that he filed a case at the Quezon City Hall of Justice against Bariou to get the full custody of his two children: seven-year-old Armelle and one-year-old Anton.

Bondoc met Bariou in 2007, that same year the model gave birth to their first child, Armelle. They got married in a civil ceremony in 2009.

Last September, Bondoc confirmed his separation from the model-actress, who made headlines when she worked as the “double” for actress Rachel Weisz in the Hollywood film “Bourne Legacy.”

Currently, the two children are with Bondoc.

“Kaya ko ginagawa ito dahil tinanong ko ang anak ko. Sinabi ko sa kanya, ‘Armelle, do you want Papa to stop this?’ Sabi niya, ‘If Papa stops this, Mama will have to take control over you. No papa, you go, you fight. You fight, Papa,’” Bondoc said.

Addressing Bariou, Bondoc said: “Alam mo Val, I’ve already talked to you a lot of times but you don’t want to meet halfway. I really don’t want to do this but it seems that you really want this and you are forcing me to do it. So I guess, I will just see you in court.”

“As a father I will do everything and anything to protect my children. Sana hindi na dumating sa ganito. But now it’s too late so I will just see you in court,” he added. (MNS)