Only 5 senators-elect show up for oath-taking before PNoy

Top 3 Senators, neophyte Senator Grace Poe(right) Senator Loren Legarda(center)and Senator Chiz Escudero pose during proclamation of the (6) Initial Senators out of 12 on Thursday night May 17,2013 at the PICC in Pasay City. (MNS photo)

MANILA, June 13 (Mabuhay) — Only five senators-elect from the administration slate showed up to take their oaths of office before President Benigno Aquino III in Malacañang on Thursday afternoon.

Legarda, Poe, Escudero and Angara attended the oath-taking ceremonies with their respective families, while Escudero was accompanied by his two children and his celebrity girlfriend, Heart Evangelista.

Poe was the surprise top-notcher during the May 13 polls.

None of the senators-elect who won from the administration’s rival coalition, the United Nationalist Alliance, were present during the event — incoming Senators Nancy Binay and Joseph Victor Ejercito and re-elected Senator Gregorio Honasan.

The President also administered the oath of 39 winning governors who ran under the Aquino-chaired Liberal Party. Aquino is national chairman of the ruling party. (MNS) 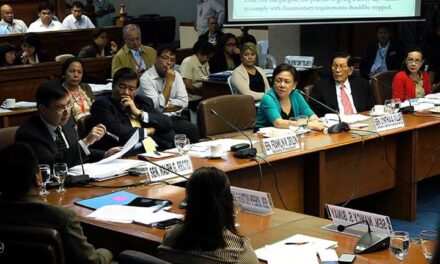