OPAPP: Peace process with CPP/NPA/NDF should bring an end to violence 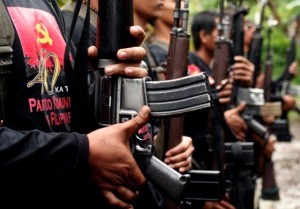 Members of the New Peoples Army (NPA) belonging to the Pulang Bagani Command celebrate the 40th Founding Anniversary of the Communist Party of the Philippines (CPP) somewhere in Davao City on Friday, December 26, 2008. The NPA, which is the armed wing of the CPP, has been fighting for the establishment of the Marxist state in the Philippines since 1968. AKP Images/ Keith Bacongco

Presidential Adviser on the Peace Process Teresita Quintos Deles on Monday said that the peace process with the Communist Party of the Philippines/New People’s Army/National Democratic Front (CPP/NPA/NDF) should have a clear agenda for ending violence and bringing peace to the people.

“Peace talks should have a clear relation to the reduction if not the cessation of hostilities that can be felt by the people right away. We have sensed a disconnect between the peace table and the situation on the ground, so that more and more people have become skeptical about the peace process,” she told the members of the Foreign Correspondents Association of the Philippines (FOCAP) during a breakfast forum at the Mandarin Hotel in Makati City.

“Clearly, talking while shooting is no longer viable. We lose public support which is very important in ensuring a viable and doable process,” the peace adviser added.

Amid the ongoing impasse in the formal talks (regular track) and the recent closure of the special track between the Government of the Philippines (GPH) and the CPP/NPA/NDF, Deles stressed the need to pursue a process that the people can relate to and where results can be readily seen on the ground. Thus, the PNoy administration is considering a “new approach” that will bridge the gap between the realities of the lives of the grassroots and the formal peace table.

Deles related that the new approach will factor in the inputs of different stakeholder groups from nationwide consultations conducted by the GPH panel on how to proceed with the talks after the failure in February of the special track and the 22-month impasse in the regular track.

She said that among the questions raised during the consultations is: “Who are we talking to?”

For his part, Padilla said, “There is recognition on the part of the government that Joma Sison plays a role in the peace process. But whether Joma Sison actually speaks for the movement is another matter.”

Padilla said one indication that Sison may no longer be in control is that in February, he reneged on a proposal he himself made for a Special Track that was designed to fast track the talks, effectively killing the initiative and setting back the peace negotiations.

Deles stressed that the new approach will not involve the GPH panel in local peace processes. “Local people have primacy over how they want peace to happen in their areas,” she said, citing the concept of “peace zones” in Sagada in the Cordillera and Tulunan in North Cotabato as examples of how the people themselves can be instrumental in promoting peace in their communities. Sagada and Tulunan were declared zones of peace by the residents who demanded that the military and the NPA refrain from bringing the armed conflict into their areas by leaving their firearms outside the town limits.

“No one had guns in these areas. The people said, ‘You are welcome to come in but you have to leave guns at some point’, and it did happen,” Deles related. “Localized peace processes are real,” added Deles. “And they (people) can make demands on the (military and NPA) forces since they are on the ground. We don’t set the rules here. The local people decide.”

In her statement, Deles reiterated the government’s commitment to include the people in the search for solutions to the challenges besetting the peace process. “We will never tire of engaging our people in meaningful discussions, seeking their help and sharing their same earnest desire and longing for peace. Please help us convey this message.”