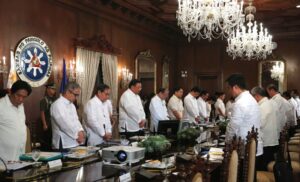 MANILA, June 24 (Mabuhay) – Cabinet officials who are interested in running for elective posts next year should emulate Vice President Jejomar Binay and resign from their posts even if they have yet to officially announce their candidacy, opposition lawmakers said Wednesday.

Buhay party-list Rep. Lito Atienza, a member of the independent minority bloc in the House of Representatives, said Cabinet officials eyeing to join the elections should resign now “out of delicadeza” (sense of propriety) instead of having their work take a backseat to their efforts to further their political ambitions.

In particular, Atienza cited Metro Manila Development Authority (MMDA) chair Francis Tolentino as one Cabinet official whom he thinks should resign because he is reportedly too busy with going around the country instead of trying to solve traffic woes besetting the capital.

“Metro Manila has been entangled in traffic everyday yet where is our MMDA chair? He’s shaking hands in Cebu, Bohol. What’s that? [He] should be fair to the public. If he wants to run for higher office, he should resign,” he told reporters in a mix of English and Filipino.

Roxas is the Liberal Party’s presumptive standard bearer, while Tolentino, De Lima and Villanueva are reportedly eyeing a Senate seat in the 2016 elections.

“These Cabinet officials should resign now so they devote 100 percent of their time to campaigning without using government funds,” said Atienza, who’s rumored to be joining the senatorial slate of the opposition coalition United Nationalist Alliance.

ABAKADA party-list Rep. Jonathan dela Cruz said that despite their denial, it is hard to believe Cabinet officials are not using public funds when they conduct campaign-like activities such as sorties since they appear in their official designation as the President’s alter ego.

“Of course they can stay until they have filed their certificates of candidacy but out of delicadeza—and since it’s also obvious they’re running anyway—they should already resign from their posts as early as now,” he said.

Dela Cruz’s sentiment was echoed by 1-BAP party-list Rep. Silvestre Bello III, who said early resignation will help Cabinet officials avoid controversy regarding their supposed abuse of their positions during the campaign trail.

Binay on Monday tendered his resignation from the Cabinet as presidential adviser on overseas Filipino workers’ concerns and chair of the Housing Development and Coordinating Council.

His daughter, Makati City Rep. Mar-len Abigail Binay, said her father quit because he was tired of being the administration’s “punching bag” while he was in the Cabinet.

“They are the only ones who can decide about [whether or not to resign],” he said.

For his part, CIBAC party-list Rep. Sherwin Tugna said that though he disagrees with the suggestion that Cabinet officials should resign, they should avoid coming out with self-promoting advertisements that were paid using public funds.

“The ads should highlight the collective work and accomplishments of the agency, not the Secretaries in their own individual capacity,” he said.

Villanueva and Energy Sec. Carlos Jericho Petilla have come out with advertisements featuring themselves in their official capacities as Cabinet secretaries in recent weeks. (MNS)

Introvoys to rock NoyPitz in one night for a cause

As days get warmer, DOH offers tips vs. food poisoning