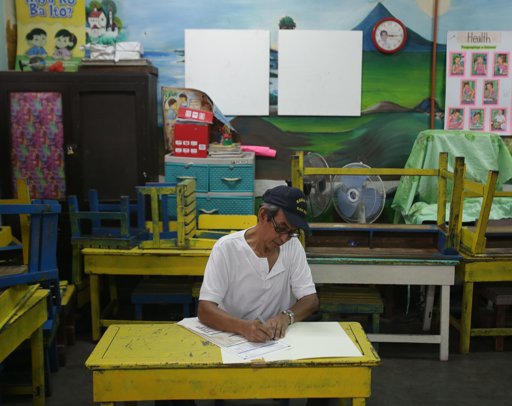 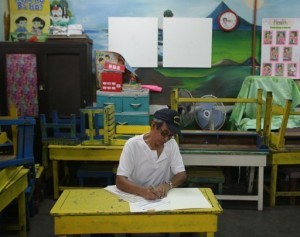 A Filipino man fills out a ballot at a classroom used as a voting precinct during mid-term elections at a school in Manila, Philippines on Monday, May 13, 2013. (MNS photo)

MANILA  (Mabuhay) – An official of the Commission on Elections (Comelec) has said that about 7.3 million registered voters may lose the chance to participate in the next national and local elections unless they have their biometrics taken before the May 2016 polls.

“Millions of registered voters still have no biometrics in the Comelec’s list of voters. Fail to fix that before October 2015 and they can’t vote,” Comelec Spokesman James Jimenez said in his Twitter account, @jabjimenez.

He advised particularly those who had registered prior to the 2004 elections to double check the status of their registrations.

Biometrics data refer to the automated identification of an individual, particularly his/her photograph, fingerprint, and signature.

The poll body official said the public should not take a chance that they can vote since they were able to participate in two previous polls.

Republic Act No. 10367 or the Mandatory Biometrics Registration Act of 2013 states that voters who fail to submit for validation prior to the May 2016 elections, shall be deactivated from the voters’ list and shall not be allowed to vote.

Earlier, the Comelec had set the voters’ registration from May 6, 2014 until Oct. 31, 2015 in all Offices of the Election Officer (OEOs) nationwide. (MNS)

1ST ROUND OF STATE VISITS