P40-M worth of smuggled Peking ducks, pigeons seized in Manila 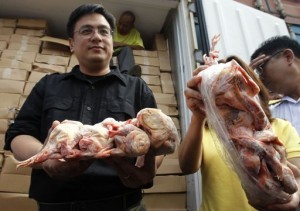 Customs commissioner Ruffy Biazon (left) shows reporters some of the smuggled frozen pigeons seized by customs officials in Manila October 18, 2012. Philippines’ Bureau of Customs have foiled the smuggling of some 40 million pesos ($970,800) worth of Peking ducks and pigeons from China in two forty-footer refrigerated containers misdeclared by a local trader as frozen mackerel, according to the bureau’s press statement.

MANILA, Oct 18 (Mabuhay) – An attempt to smuggle some P40 million worth of Peking ducks and pigeons was foiled by Customs officials last Tuesday at the Port of Manila, thanks to the agency’s “hi-tech” x-ray scanners.

“The importer of these Peking ducks and pigeons may have underestimated the capabilities of our x-ray machines and thought that they would be able to do away with their illegal trade by concealing their hot shipment behind the pile of boxes of frozen mackerel inside the reefer vans,” said Customs Commissioner Ruffy Biazon on Thursday.

The ducks and pigeons were contained in two forty-foot vans consigned to Hexa Trading, Biazon said.

According to Ma. Lourdes Mangaoang, head of the Customs’ X-Ray Inspection Project (XIP), the vans were scanned by their operatives in compliance with Biazon’s instruction to subject all refrigerated vans to x-ray scanning in preparation for the holiday season.

“With the way the Peking ducks and pigeons were stuffed, the intention to illegally sneak these frozen food products into the country is obvious. Had it not been for our high-tech x-ray machines, Hexa Trading may have succeeded in its smuggling attempt,” she said.

The Bureau of Customs takes pride in its x-ray scanners, and has praised them in the past for significantly improving the success rate of detecting smuggled items.

Biazon vowed to go after Hexa Trading for smuggling violations. “We will also sue the officials of this company for violations of the Tariffs and Customs Code of the Philippines (TCCP),” he said.

AFP not informed of raid: Gazmin