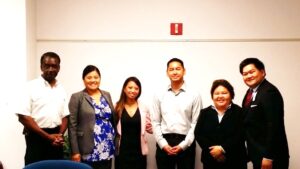 Los Angeles, CA – The Philippine American Bar Association (PABA) spearheads an effort to name a school facility within the Long Beach Unified School District (LBUSD) in honor of Filipino American labor leader, Larry Itliong, a native of Pangasinan, Philippines.  Itliong was the founder of the Filipino Farm Labor Union and leader of the Agricultural Workers Organizing Committee (AWOC), which was responsible for the Coachella Valley Strike and the Great Delano Grape Strike in 1965.  In 1966, Cesar Chavez’s National Farm Workers’ Association (NFWA) joined Itliong’s AWOC, forming the United Farm Workers of America (UFW), one of the greatest unions in the history of the nation.  Together, Itliong and Chavez led the historic march to Sacramento to fight for better working and living conditions, which eventually led to agreements for better wages and protections of farm workers in the 1970s.

On August 5, 2015, PABA leaders, Christine Gonong, Citadelle Priagula, Hildegarde Aguinaldo, and Ireneo Reus III met with Dr. Felton Williams, President of the LBUSD Board of Education, and Robert Tagorda, Director of LBUSD’s Office of Equity, Access, and College & Career Readiness, to seek clarification on the naming process.  On November 16, 2015, PABA formally sent to the LBUSD Board of Education its proposal to name an LBUSD school facility after Itliong.

PABA’s proposal came on the heels of Governor Jerry Brown’s signing on June 30, 2015 of AB 7, a bill establishing October 25 as Larry Itliong Day.  Introduced by Assemblymember Rob Bonta (D-Oakland), AB 7 ensures that Mr. Itliong’s work and legacy of fighting for justice, opportunity, and equality will be properly honored for generations to come.  “Larry Itliong was unquestionably one of the great leaders in our state’s history.  He changed the course of history by standing up for farm workers’ rights,” Assemblymember Bonta stated.

Tagalog is the third most widely spoken foreign language in households across the United States, following Spanish and Chinese.  As of 2011, California is home to 45 percent of all Filipino immigrants to the United States.  Although Filipinos are the largest Asian American group in California, there is only one school in this state that is named after Filipino American heroes, the Itliong-Vera Cruz Middle School in Union City, California.  Formerly known as Alvarado Middle School, the Itliong-Vera Cruz Middle School was named after Itliong and Philip Vera Cruz, another labor movement leader from the Philippine town of Saoag, Ilocos Sur.

PABA initiated the proposal to dedicate a school facility in Southern California to Itliong to recognize his contributions to the state, home to at least 1.5 million documented Filipino migrants and Filipino Americans.  PABA chose to seek the aid of the LBUSD Board of Education, because West Long Beach has a high concentration of Filipinos.  Indeed, 1 out of 10 enrollees at Cabrillo High School is Filipino, and Filipinos make up the third largest group in the campus, next only to Hispanics and African Americans, respectively.

PABA President Christine Gonong stated, “PABA’s proposal will not only recognize the contributions of Filipino Americans, but will also be consistent with the text of AB 7, which encourages public schools to remember the life of Mr. Itliong, recognize his accomplishments, and educate the students about the contributions he made to this state.”

“I believe that this proposal will inspire students and highlight the rich diversity in Long Beach,” said PABA Governor Ireneo A. Reus III, who grew up in Long Beach and attended schools in the LBUSD.  “Just as the LBUSD already named a school after Cesar Chavez to honor Mr. Chavez’s contributions and legacy, PABA believes that the LBUSD should also name a school after Mr. Itliong to honor his contributions to this great state and the labor movement,” Reus added.

Based in Southern California, PABA, the largest local association of Filipino-American lawyers in the United States, is comprised of attorneys, judges, and law students.  It was formed in response to the legal issues confronting the Filipino-American community and the professional concerns of Filipino-American lawyers and students seeking to enter our profession.  PABA aims to strengthen, educate, and support our community through advocacy, legal clinics, pro bono legal services, continuing education seminars, mentoring programs, and scholarships.