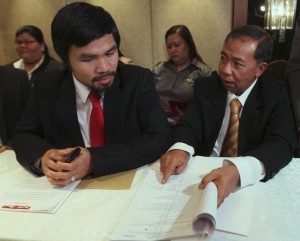 26pacquiao3.jpgâ€”World Boxing Organization welterweight champion and congressman Manny Pacquiao (L) of the Philippines looks at documents shown by his attorney Remigio Rojas during a news conference in Manila March 26, 2012. Pacquiao, vowed to fight to the finish until the final and last round the tax case against him saying it has affected his training for the June welterweight fight against U.S. boxer Timothy Bradley in Las Vegas. (MNS photo)

MANILA, Apr 2 (Mabuhay) â€“ Boxing champ and Sarangani Rep. Manny Pacquiao can transfer his tax registration once again from General Santos City to a different district but only after settling any tax obligations in the region, a tax official said Monday.

â€œHe can, but he has to write to us. He needs to settle tax obligations in his region first before he can be allowed to transfer,â€ Bureau of Internal Revenue Region 12 director Rozil Lozares said.

He also questioned why Pacquiao would want to transfer his tax registration when he plans to run for governor of General Santos.

â€œIt will not look good for him politically because he announced he will run for governor here. It would not be good if he pays his taxes in another district. Itâ€™s his call,â€ he said.

The Philippine Daily Inquirer earlier reported that Pacquiao is planning to transfer his tax registration to either Manila or Laguna after he was sued by the BIR for failure to submit copies of his endorsement contracts.

She said the case against Pacquiao will be dropped once he submits copies of his endorsement contracts.

Lozares, whose office filed the contempt case against Pacquiao for his failure to submit documents, denied they were harassing the congressman.

Pacquiao was sued for contempt by the BIR Region 12 Office for his failure to submit documents that would prove he paid the correct taxes in 2010.

Pacquiao earlier declared assets at the end of 2010 at P1.13 billion ($26.3 million) and no liabilities, making him the wealthiest member of the House of Representatives.

Lozares said they will keep an eye on Pacquiaoâ€™s 2011 income tax return filing as well.