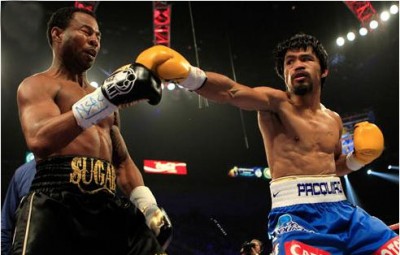 LAS VEGAS, May 8, 2011 (AFP) – Filipino champion Manny Pacquiao retained the World Boxing Organization welterweight title on Saturday by beating American Shane Mosley to extend his win streak to 14 bouts. Pacquiao came on strong in the third round, knocking Mosley down with a straight left hand and then went on to earn a convincing unanimous decision in front of a sellout crowd of 16,000 at the MGM Grand Hotel and Casino.

â€œHe felt my power,â€ Pacquiao said. â€œI wanted to fight toe to toe. I did my best to give a good fight.â€
Pacquiao, a 10-time world champion in a record eight weight divisions, was making the second defense of his current welterweight crown.

The southpaw from Sarangani dominated from the opening round as Mosley spent the majority of the fight in full retreat.
Pacquiao was the aggressor, continuing to push forward and trying without success to go for the knockout, especially in the third and 11th and 12th rounds.

Pacquiaoâ€™s knockdown in the third round was just the third time in Mosleyâ€™s 18-year career that the American challenger has hit the canvas. Mosleyâ€™s main goal appeared to be simply keeping his record of never being knocked out intact.

He managed to succeed but was booed loudly, especially at the beginning and the end of the eighth round.
Referee Kenny Bayless awarded Mosley a suspect knockdown in the 10th round as television replays showed that Pacquiao was throwing a punch off balance, slipped and went down with a little help from Mosleyâ€™s right hand.

Mosley claimed he would expose Pacquiaoâ€™s weaknesses but there was no turning back the clock for the 39-year-old four-time world champion who looked every bit his age on Saturday.

Pacquiao earned close to $15 million while Mosley collected about $5 million.

When is lasik a smart investment