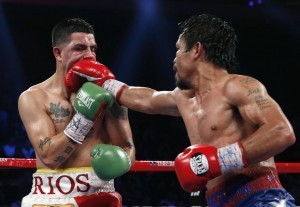 Manny Pacquiao (right) from the Philippines, right, lands a right to Brandon Rios of the United States during their WBO international welterweight title fight Sunday, Nov. 24, 2013, in Macau. Pacquiao defeated Rios by unanimous decision on Sunday to take the WBO international welterweight title and return to his accustomed winning ways after successive defeats. (MNS photo)

In what could have been his swansong in boxing, Manny Pacquiao proved he still packs a mean punch, registering a unanimous decision victory against American Brandon Rios, Sunday at The Venetian Macau, claiming the WBO International Welterweight in the process.

It was total domination for Pacquiao, who pummeled rios with a flurry of punches. Even if he responded with smiles after combinations, the American clearly could not handle the speed of the eight division world champion.

“Recovering from the knockout and giving a good show just like the young Manny Pacquiao,” the Saranggani representative said after the win.

Pacquiao also shared that he was very careful this time around, avoiding a repeat of the result in his last loss against Juan Manuel Marquez:

“I’m very careful. I learned in the last fight.”

Pacquiao also had some good words for Rios, who absorbed a beating.

“He’s one of the toughest opponents in my career. He took a lot of punches but he’s still standing,” Pacquiao said.

After nearly a year away from the ring, the Filipino ring icon, who dedicated his win to victims of Super Typhoon Yolanda, showed he still has what it takes, as he took down the taller Rios.

Coming into the bout, Pacquiao described himself as hungry, following what was essentially a year away from boxing, after losing last December to arch-rival Juan Manuel Marquez via a sixth-round KO, and prior to that, a controversial split decision to Timothy Bradley.

That hunger manifested positively, as the Filipino congressman gave his Super Typhoon-struck countrymen something to cheer for.

Pacquiao dedicated his bout to the victims of Yolanda (international name Haiyan), and his fight was broadcast for free to security forces and aid workers, as well as the citizens, many homeless, of Tacloban.

It was not immediately known what Pacquiao’s next bout would be, but it is possible that he will seek a rematch against Marquez, or see if Floyd Mayweather Jr. will finally rise up and face him, in a bout many boxing fans have long clamored for.

On the other hand, it is the second straight loss for 27-year-old Rios, who blazed into the limelight after registering 31 wins and a draw without a defeat, until losing his rematch against Mike Alvarado via unanimous decision last March for the Interim WBO Welterweight title.

It was Pacquiao’s first fight outside the United States since winning at home against Oscar Larios in 2006. Celebrities were still on hand at The Venetian to witness the fight, including football superstar David Beckham, who was shown visiting Pacquiao right before the match. American Idol finalist Jessica Sanchez sang both the American and Philippine national anthems. (MNS)