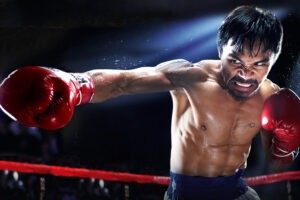 Los Angeles, United States | AFP  – Manny Pacquiao pronounced himself ready to fight Floyd Mayweather, saying he’s willing to engage the unbeaten American in the middle of the ring if that’s what it takes to win.

The eagerly-anticipated May 2 welterweight unification showdown in Las Vegas promises to be the most lucrative fight in boxing history.

“I am very excited,” Pacquiao said Wednesday at the Wild Card gym in Hollywood. “My training and my conditioning is good. I can feel it. I am ready.”

Pacquiao says that is why he is training harder and with more drive and determination than for any other fight in his career.

“I know this is one of the biggest fights ever in boxing,” he said.

“I am not saying it is the biggest, because that would be insulting to the other fights that have been done already.

“But it is one of the biggest.”

Pacquiao defended his aggressive style after Mayweather, 38, on Tuesday called the 36-year-old Filipino superstar a “reckless” fighter whose careless actions leads to knockouts.

Pacquiao said boxing fans appreciate a fighter who comes to box and put on a good show.

“Reckless fighter, that is how people like me and love me,” Pacquiao said.

Pacquiao was speaking in Hollywood at the final news conference he is giving before he heads to Las Vegas for the fight at the MGM Grand Hotel and Casino.

The boxer said he doesn’t need a blockbuster fight with Mayweather to define his legacy, that winning titles in eight divisions has far exceeded his expectations.

“My entire career defines my legacy. Everything I have done in boxing,” he said.

“I have had some great, great accomplishments and achievements in my career. I won titles in eight different weight divisions.”

His hall-of-fame career has surpassed anything he could have imagined when he got into sport after someone told him he could earn 100 pesos (about $2) for a fight.

The 12-year-old used the money from that first decision victory to buy rice for his poverty-stricken family in the Philippines.

“I don’t want to boast and talk about the eight different weight divisions, but that accomplishment is amazing. Beyond my expectation,” he said.

“When I started boxing, I never imagined it.”

Pacquiao spoke to a small group of reporters in the basement of the Wild Card gym in Hollywood.

He then went upstairs to the main gym for a workout in front of a standing-room only crowd of photographers and television cameras.

Pacquiao began his workout with a shadow-boxing session without gloves.

Wearing a grey t-shirt with the words Team Pacquiao on the back, he worked out on his own for several minutes, while trainer Freddie Roach watched from the corner as the throng of media pressed up against the outside of the ring.

Pacquiao said the fight would have never seen the light of day if he hadn’t agreed to a 60/40 split of the purse, with Mayweather getting the bigger share.

He sought, but failed to get Mayweather to agree on a $5 million penalty for anyone who fails a drug test in the buildup to the fight.

Mayweather had previously accused Pacquiao of using performance-enhancing drugs, which became one of the stumbling blocks that helped scuttle previous negotiations.

“I suggested it. I was surprised he turned it down,” Pacquiao said.

“I was surprised because I was not the one making accusations. They were the ones blaming me because I didn’t want to drug test.”

Pacquiao said he has already been tested about six times since the May 2 fight was announced.

The two fighters also declined to put a rematch clause in the contract.

“The negotiations for the first one were so hard,” Pacquiao said.

“How can we talk about a second one? The first one was so hard to make happen.”