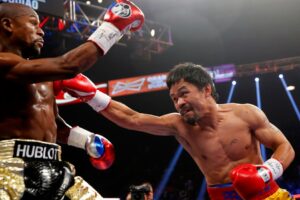 Manny Pacquiao throws a punch but doesn’t his target as he fails to beat Floyd Mayweather, Jr. during their welterweight WBO, WBC and WBA (Super) title fight in Las Vegas, Nevada. (MNS Photo)

May 2, 2015: The fight finally concluded. The result was expected. Boxing analysts were right. Mayweather won by a unanimous decision and still clings to his unblemished record that now stands at 48-0 after defeating Manny “Pacman” Pacquiao (57-6-2, 38KO) in a tactical fashion and unified the world welterweight championship titles and captured WBC’s handcrafted emerald belt.

Judge Glenn Feldman and Judge Burt Clements have identical scores of 116-112 in favor of Mayweather winning all rounds except round 4, 6, 9 and 10. Whereas, Judge Dave Moretti scored it 118-110 with Pacquiao only winning round 4 and 6.

The fight of the century did not live up to the hype leading to the match. Mayweather did what was expected of him, did what he normally does, jabbing, counter-punching, clinching, dancing and running away when an opponent was getting the upper-hand. “He was moving around too much, it wasn’t easy throwing punches at him. If he would ‘ve stayed in one place then I could’ve thrown punches. I was cutting him and countering. I wanted to fight,” Pacquiao said.

Pacquiao’s preparation for three months and strategy formulated with Coach Roach were not enough to win the fight. He was simply out-smarted, out-boxed and out-played by Mayweather. “I knew he was going to push it and win some rounds. He had some moments in the fight, but I kept him on the outside. I was a smart fighter. I am a calculated fighter,” Mayweather said 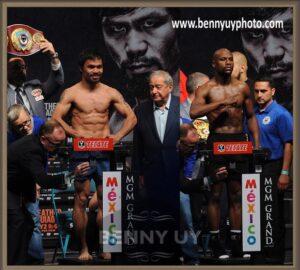 Manny Pacquiao weighs in at 145 lbs while Floyd Mayweather at 146. The two will face each other Saturday at MGM Grand Garden Arena in Las Vegas. Photo: Benny Uy

Pacquiao was expected to throw volume punches to win but he only threw 429 and connected only 81 of them against Mayweather’s 435 with 148 punches landed. That a big difference of 67 punches that spelled out a clear victory for Mayweather. Pacquiao was more on a defensive stance rather than offensive moving forward chasing Mayweather with two hands up weaving his body left to right anticipating to evade Mayweather’s punches instead of concentrating on throwing his punches and this went on throughout the fight.

To the surprise of many, Mayweather did not run in the first round. He stood his ground toe to toe with Pacquiao in the center of the ring and was active more than his opponent connecting with his jabs and his punches and only clinched on the final 8 seconds when Pacquiao was hitting some combinations.

“I play chess,” Mayweather said. The best chess move I did was when I got Alex Ariza to work with me, to know Pacquaiao’s weakness.”

“It was a good fight; I thought I won the fight,” Pacquiao said. “I thought I was up in the fight, so that’s why I didn’t attack harder in the 11th and 12th.” This was something that Pacquiao’s corner failed to notice as clearly Mayweather was leading and should have told Pacquiao to make the move or lose.

Contrary to Larry Holmes beliefs, Pacquiao did not win the early rounds. It was only on the 4th round that Pacquiao finally connected and bombarded Mayweather with combinations as he was cornered to the ropes. However, for reason unknown Pacquiao stopped and allowed Mayweather to recompose.
Round 11 clearly showed Mayweather’s defensive skills. As Pacquiao connected with a huge right, Mayweather instinctively blocked Pacquaio’s straight left with his right glove avoiding what could have been a catastrophe.

Pacquiao said in the post fight press conference that he re-injured his right shoulder in the 3rd round. He had that right shoulder injury few days before the fight and requested the Nevada Athletic Commission for permission to inject medication but was turned-down due to the timing as it was already too close to the fight. If it was a factor, Pacquiao said, “I do not want to make an alibi.”

There will be no rematch in the works. “All I need to do is go home, rest and enjoy my championship,” Mayweather said.

Stephen Loman wants to challenge for ONE bantam title

‘Linsanity’ and the Rockets to play Indiana Pacers in Manila