Since five years ago the heat has been building up from both camps of Filipino eight world title holder Manny Pacquiao and unbeaten Floyd Mayweatther Jr. to bring them into the ring. Amid the back and forth negotiations to smoothen out some issues, finally the two great boxing gladiators will meet at MGM Garden in Las Vegas on May 2nd for what is dubbed the “Fight of the Century”.

The unique encounter is the most awaited encounter and has the distinction  being the top prizefight event where both boxers will laugh their way to the bank after less than an hour of blood and sweat if the fight goes through the scheduled 12 rounds.

Pacquiao will pocket $80 million while Mayweather will be $120 richer. The staggering amount to stage the fight will cost their fans a lot of money to witness in person or in pay-per view mode.

Pacquaio so far has been the only Filipino boxer in history to have ever amassed tons of money doing a job at the canvassed real estate and viewed by millions of boxing fans around the world at different time zones.

Good timing and providence are factors that enabled Pacquiao to reach a pinnacle of success in chosen career. Gifted with extraordinary athletic ability and a no-nonsense approach to his craft, the Filipino sports hero continues to reap the natural fruits of his solid commitment. 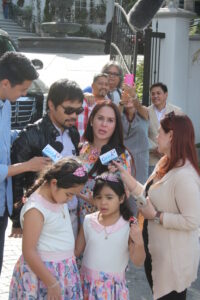 Boxing Pays: Jinkee Pacquiao, wife of boxing champion Manny Pacquiao, appreciates the champ’s gift of a house in the famed Beverly Hills area shown to her shortly after her arrival in Los Angeles. The Pacquiao’s are expected to move in their new abode by the first week of April. Realtor Nick Enciso,(extreme right in the background) from Century 21 Classic Estates in Cerritos brokered for the mansion once owned by a celebrity.

The one “who was nothing where God made something” has been tremendously blessed and wants the world to know where all his blessings come from. In a brutal sport such as boxing, invoking spirituality is seldom heard of but in many of his previous fights, he used the occasions to acknowledge the “source of his inspiration and strength”. Temporary setbacks only strengthened his resolve to do what he had been commissioned to accomplish.

There is nearly no country in the world that doesn’t know boxing and its immense popularity contributes to pave the way for many boxers to hitch their wagons to fame and fortune.

Boxing has long been one of the world’s most popular combat sports in terms of viewership and practice. Mishaps in the ring that even cause death had not deterred many to engage in the sport thinking of traversing the road as a path that will bring wealth in the end given the right opportunity.

Tracing its origins as far back as 7,000 years ago in Mesopotamia, boxing has evolved through the years. It was a brutal sport (as still is today) where death is a common fate of losers. Because fighters wore no protection and had no rules of engagement implemented the results of the fights were usually fatal.

Modern boxing has developed from unruly brutal fights to a spectacle where the boxers are fully protected in terms of rules and the safety of the contenders fully addressed.

Philippine Boxing: Filipinos have been known to be “fighters” even before the Spaniards and the Americans came to the Philippines. “Suntukan,” a familiar term to most Filipinos is a kind of boxing using bare hands to fight. It is believed to have evolved from the Filipino version of knife-fighting technique known as” Kalit”. It was banned during the Spanish time and was driven underground. The new derivative of such cruel duel using knives and rattan sticks led to fist fighting.

Visiting Pinoy lawyer who was shot in US dies

I woke up from my American Dream

Researchers develop alert system to prevent phone use at the wheel