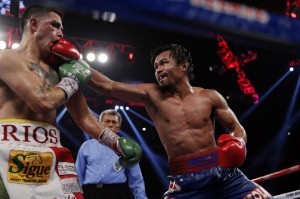 Amid a welter of reports in recent weeks that a deal for the much-anticipated bout was all but done, Roach warned that a decision would be needed soon if both fighters are to prepare adequately.

“We are getting really close,” Roach said of reaching a cut-off for declaring a May 2 fight a reality.
“I need eight weeks. That window is getting smaller and smaller.”

In fact, Roach said, he could make do with a slightly shorter training camp with Pacquiao, the eight-division world champion who said Monday in the Philippines that a deal was “near.”

On an eight-week schedule, the first fortnight would be core training and general conditioning, Roach said.

“The boxing would start six weeks out, because if you go more than six weeks with Manny you’ll burn him out because of his work ethic.”

Pacquiao is 57-5 with two draws and 38 knockouts, while Mayweather is 47-0 with 26 knockouts.
Fight fans around the world have clamored for years for a showdown between the boxers widely regarded as the best “pound-for-pound” fighters of their generation.

The Sunday Telegraph in Britain reported that the pair had agreed to a $250 million deal, although on Sunday night in New York, Mayweather said in a brief television interview during the NBA All-Star Game that nothing had been signed by either party.

Last year, Mayweather used the occasion of his 37th birthday on February 24 to announce his opponent for a May 3 bout—plumping for Argentina’s Marcos Maidana and snubbing England’s Amir Khan.

A similar birthday announcement by Mayweather would make for a nine-week lead time to a May 2 fight.

Pacquiao promoter Bob Arum last month ignited buzz over the fight when he said negotiations had been “narrowed down to extraordinarily small points.”

On Tuesday, however, Arum took himself out of the prophecy business.

“I know nothing,” Arum said of the state of negotiations as he attended a public workout at Roach’s Wild Card gym for Chinese fighter Zou Shiming.

Roach, however, thinks the fight—which ran aground in 2009 — will happen.

Pacquiao said this week he had agreed to the Mayweather camp’s demands regarding drug testing.

Published reports citing sources close to the Filipino ring icon have also said he has agreed to give Mayweather the lion’s share of what promises to be the biggest pay-day in boxing history.

“I think it would be the biggest fight of all time,” Roach said. “A lot of it has to do with the world we’re living in—you have pay-per-view almost everywhere.”

Those pay-per-view revenues have added another wrinkle to the negotiations, since the fighters are under contract to rival US telecasters, Showtime and HBO.

If fight fans do get the bout they’ve been waiting for on May 2, Roach has no doubt who will bring the fireworks, with Pacquiao ready to take some risks to make an exciting fight.

That’s not something he expects from Mayweather, a slick defender who Roach believes is reluctant to risk his unbeaten record.

“I don’t think he really cares about the fans,” Roach said of Mayweather. “I think he just wants to do enough to win. Manny’s not like that. That’s why Manny’s been knocked out a few times. That could happen again, but I’d rather see a fighter get knocked out trying to win than just trying to go the distance.”