The eight-division world champion Pacquiao, whose last fight was a 12-round unanimous decision over Antonio Margarito, will fight Mosley for the World Boxing Organization welterweight title May 7 at the MGM Grand hotel and casino.

“I want Manny to knock him out and I think we can,” said trainer Freddie Roach on Wednesday. “But Manny is a compassionate person at times. Like he wouldn’t hurt Margarito.

“He took it easy on him in the last two rounds and let him last the fight. Asked him if he is OK couple of times. Manny doesn’t want anyone get hurt.” 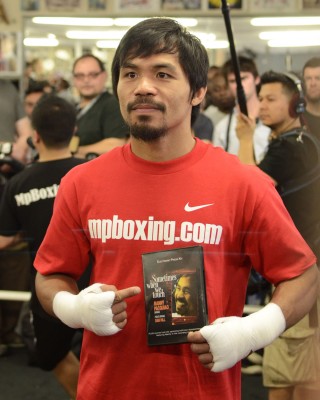 Despite giving away 17-pounds, Pacquiao bloodied and bruised the bigger Margarito’s face and then carried him through the late rounds. Margarito had to have surgery to repair a broken eye socket but it could have been a lot worse if Pacquiao hadn’t let up.

But Pacquiao says he also can’t afford to underestimate the 39-year-old Mosley who has gone 53 fights in his 18-year career without being knocked out.

“He (Mosley) is determined to shock the world,” Pacquiao said. “He is a good fighter. I don’t underestimate him. I never say it is going to be an easy opponent.”

“His focus is great. There are less distractions this time. He is very motivated and has continued to push himself from day one,” Roach said.

Roach said their game plan is a simple one — box with Mosley early then wait for him to tire and make a mistake.

“Part of the game plan is to out box him and when we do break him down get him to the point where we can take him out,” Roach said.

“He can’t move like he used to for 12 rounds. I don’t think his legs are what they used to be. Somewhere in the fight he is going to have to stand flatfooted and fight with us. I think that is when we can catch him.”

Mosley has 46 wins and 39 knockouts but has lost twice and struggled to a draw in his past five fights. He fell to Puerto Rico’s Miguel Cotto in 2007 and unbeaten Floyd Mayweather in May before a draw against American Sergio Mora in September.

“He has a good chin,” Roach said of Mosley. “It (knockout) has never been done. He has fought every fighter in the world and some great fighters.

“He is a tough guy and I am sure he is going to come into the ring in the best shape he can.”

Pacquiao has won 13 fights in a row and the southpaw has not lost in nearly six years. In that span he has dispatched such stars as Oscar de la Hoya, Ricky Hatton, Miguel Cotto and Juan Manuel Marquez.

“I have to be careful of his (Mosley) size and speed,” Pacquiao said. “I have to focus on his speed and counterpunch.

“When we get in the ring I can read what he is doing, his style and then adjust.

“He can still fight. He is not as slow as Margarito. He is fast and he moves fast. He is trying hard and he can do a lot of things.”

Pacquiao has also claimed world titles in eight weight classes. He always divides his time training for a fight between the Philippines and America but for this fight they decided to change things up a bit.

“We started early for this training camp,” Pacquiao said.