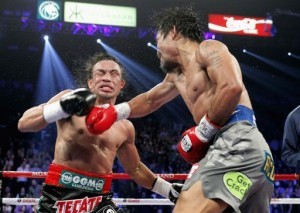 Juan Manuel Marquez (L) of Mexico takes a punch from Manny Pacquiao of the Philippines during their welterweight fight at the MGM Grand Garden Arena in Las Vegas, Nevada December 8, 2012. (MNS photo)

Pacquiao was leading in all of the judges’ scorecards when he walked into a perfect right counter-punch thrown by Marquez with just a couple of seconds left in round 6.

The “Pacman” crashed face-first to the canvas and was motionless for several moments. It was his first knockout loss since 1999.

After listless performances in his last two fights, Pacquiao was showing his old, aggressive form against Marquez.

Though he was knocked down in the third round, Pacquiao quickly stood back up and registered a knockdown of his own in the fifth.

He was controlling the sixth round and believed that it would only be a matter of time before he could finish off Marquez.

But unfortunately for Pacquiao, he got reckless and walked right into Marquez’s short right hand.

Despite the devastating loss, Pacquiao has no plans to hang up his gloves.

He does not know yet who his next opponent will be or when he will fight next.