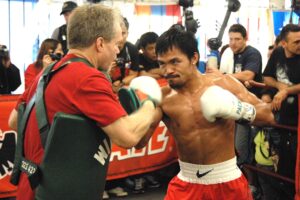 Pacquiao’s workout at the Wild Card Gym included five hard rounds with a pair of sparring partners. It pleased trainer Freddie Roach as well as the Asian legend, who was anxious to start swinging his fists at foes following nearly two weeks of other training.

“After 13 days of strength and conditioning and boxing drills at Wild Card plus weeks more of working out in the Philippines in February, it was great to finally put on the headgear and spar,” Pacquiao said.

“My sparring partners gave me good work today. They were perfect for testing the strategy Freddie and I have developed to beat Floyd Mayweather. I was very happy with my stamina and speed.”

Roach was especially pleased with Pacquiao’s form considering he had not been inside the ropes since defeating Chris Algieri last November in Macau.

“Manny looked so fresh today. I’m very happy with what he showed me,” Roach said. “You couldn’t tell he had been away from the ring since the Algieri fight in November. Manny is on fire in the gym.”

Pacquiao, a two-term Congressman from Sarangani province in the Philippines, is 57-5 with two drawn and 38 knockouts while Mayweather is 47-0 with 26 knockouts entering their Las Vegas matchup, a fight fans have been wanting to see for more than five years.

The much-anticipated showdown for the pound-for-pound global bragging rights is expected to break boxing revenue records.

“When Manny threw out the first punch it felt like opening day of Irish Spring Training,” Roach joked. “I am confident May 2 will be celebrated for years to come as St Manny’s Day – the day he drove Mayweather out of boxing.”

Over 20 cases filed vs. importers, brokers since January 2022