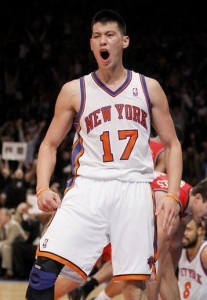 LOS ANGELES, Feb. 21 â€“ Like much of America, Fighter of the Decade Manny Pacquiao has been swept up in Linsanity.

â€œIâ€™m so proud of Jeremy Lin,â€ Pacquiao told Balita Media after a press conference on Tuesday at the Beverly Hills Hotel, which jumpstarted the promotional tour for his welterweight bout with Timothy Bradley. The fight is scheduled on June 9 at the MGM Grand Garden in Las Vegas.

Pacquiao said he is scheduled to meet with Lin, the Taiwanese-American overnight NBA sensation, before the start of the New York Knicks-Atlanta Hawks game Wednesday in New York. The frenzy over Linâ€™s phenomenal success is known as â€œLinsanity.â€

Pacquiao said he is looking forward to his meeting with Lin and would like to watch Lin play if his schedule would allow it. When asked what they would talk about, Pacquiao said, â€œI donâ€™t know yet.â€

Earlier reports said that while in New York, Pacquiao will also meet with his team of attorneys to discuss the filing of a defamation lawsuit againstÂ his arch-nemesis Floyd Mayweather, Jr.Â and his father and uncle/trainer.

Mayweather Jr. has recently caused controversy when he said that â€œJeremy Lin is a good player but all the hype is because heâ€™s Asian. Black players do what he does every night and donâ€™t Â get the same praise.â€

When asked about Mayweatherâ€™s comment, Pacquiao defended Lin, saying Lin is being praised because of his ability and race has nothing to do with it. He said that it was not right for Mayweather to â€œjudgeâ€ Lin. â€œIf somebodyâ€™s judging others, let God judge them,â€ he said, then proceeded to quote a bibilical verse: â€œDo not judge or you, too, will be judged.â€

Pacquiao fans have drawn similarities between him and Lin. Both are known for their humility, strong work ethic, and for being devout Christians who often quote biblical verses.

â€œGodâ€™s given me a unique platform and right now I’m trying to use it in the right way,â€ Lin was quoted as saying recently. â€œI can use nationalÂ television, I can use media in a way to talk about my faith, to talk about how much God has done in my life, not what Iâ€™ve done to make it to the NBA.â€

Pacquiao, on the other hand, has recently accepted an invitation by the Catholic Bishops Conference of the Philippines (CBCP) to become a â€œBible Ambassadorâ€ and help strengthen the Roman Catholic Churchâ€™s Biblical apostolate in the country.

At the press conference, held at the historic Beverly Hills hotel, Pacquiao and Bradley posed for photos and praised each other.

â€œTimothy Bradley is strong, and he can punch. Heâ€™s a good boxer, so itâ€™s a challenge to fight a guy like that.â€

On June 9, the 33-year-old Pacquiao will stake his World Boxing Organization welterweight crown against Bradley, his 28-year-old WBO junior welterweight counterpart in a pay-per-view bout at the MGM Grand Garden Arena in Las Vegas, Nevada.

Karatedo: AAK Davao to continue sports programs and stay out of politics