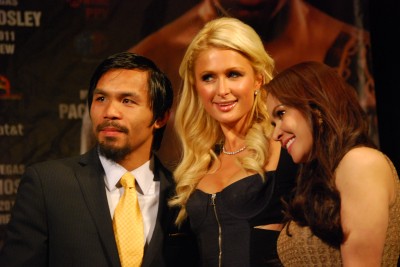 LAS VEGAS – Everybody has great expectations whenever Manny Pacquiao enters the ring. So that when his fight turns into a pedestrian boxing, the fans that pay princely sum to get into the arena get listless, disappointed, and angry.

On Saturday night, during the Pacquiao-Shane Mosley WBO welterweight title duel at the MGM Grand Garden Arena here, the fans – 16,412 of them – took issue on how the fight went on after the third round.

They booed, they snickered, they made catcalls.

Mosley, dodged the bullet saying he did not hear the jeers as he was busy doing his thing inside the ring. Pacquiao, who fights â€œto make the fans happy,â€ did hear the hecklings all right, and blamed Mosley for not engaging toe-to-toe with him.

At the post-fight briefing, Top Rankâ€™s Bob Arum explained that Pacquiao is partly to blame for his opponents fighting inside a shell. It started with Joshua Clottey, Antonio Margarito, and then this, with Mosley.

â€œWhat we have here (in Manny) is a boxing phenom. His power takes the opponents out of their game plan,â€ said Arum. â€œThe thing is once Mannyâ€™s opponents get a taste of his power; they resort to â€˜survival boxingâ€™.â€

Hall of Fame-bound Mosley, who dropped onto the canvas in only the third time in his 18-year illustrious boxing career, took a very cautious stance after the third round, and was never the same again after that. He was backpedalling most of the time and his punches came very few and far between.

The Showtime punch stats distributed to the sportswriters inside the media center showed that Mosley threw only 260 punches, and landing 82. On the contrary, Pacquiao threw 552 punches and 182 of those finding the target, including the left-right combo that sent Mosley sitting on the canvas.

Pacquiao, who also found himself reeling and finding the canvas in Round 8, no thanks to the power shove by Mosley, which referee Kenny Bayless counted as knockdown, was obviously annoyed by the call and started chasing Mosley for the kill. That was when the sporadic boos even got louder as Mosley became more concerned in covering himself than throwing his punches. The onrushing Pacman was able to get into Mosley his vaunted combination a couple times, but were not enough to dismantle the backtracking Mosley.

â€œI was hurt, pretty stunnedâ€¦the impact was very strongâ€ said Mosley on the left-right combo that floored him in third. â€œMannyâ€™s punching power is exceptional. He is fast and he can hit you with a lot of punches.â€

Asked which fighter is the better one â€“ Pacquiao or Floyd Mayweather Jr., — having had unsuccessful challenges to both of them, Mosley was ambivalent, saying both fighters have their own merits and it would be very interesting if the two of them meet inside the ring.

Pressed on the issue, he said that the Pacman definitely had the edge in punching power, and Money May should the more skilled and defensive fighter.

So, what is next for the 39-year old Mosley?

â€œTake a vacation. Relax. I have promised my son we are going to Disneyland,â€ said the former three-division champion from Pomona, California.

As for Congressman Pacquiao, who showed up for the post-fight press conference at the media center dapper and dandy in black suit, with wife Jinky and new celebrity friend Paris Hilton, it will be back to work in Congress, and serving his constituents in Sarangani province.

â€œI will be back to my work in Congress. There are a lot of things to do,â€ said Pacquiao, who wore a yellow glove to highlight his poverty reduction advocacy in the Philippines.

And if Pacquiao is not thinking about his next opponent, his manager, Arum definitely is. Arum said he sent an invitation to Juan Manuel Marquez if he wanted to fight Pacquiao in November, but the Mexican fighter, who is with the Golden Boy promotions, ignored the invitation. A second, revised deal is forthcoming and Arum is confident Marquez will likely agree to it. Marquez fought with Pacquiao twice, the first one ended in a controversial draw and the second, a close split decision.

Fight notes: #1 The fans displeasure notwithstanding, the event was not at all devoid of interesting stuff. For one thing the undercards proved very entertaining, so was the Hollywood factor â€“ Jamie Fox waxing patriotic with his rendition of Irving Berlinâ€™s â€œGod Bless Americaâ€; Rocker Jimi Jamison performing â€œEye of the Tiger,â€ during Pacquiaoâ€™s pre-fight walk; Pop star Chariceâ€™s doing the â€œofficial and correct beatâ€ of Philippine National Anthemâ€; LL Cool J singing â€œMama Said Knock You Outâ€ for Mosleyâ€™s entrance to the arena; and the ringside appearance of Hollywood socialite Paris Hilton.
#2 Pacquiao gets a $20 million share of the fight purse, and Mosley gets $5 million, according to boxing news from Dan Rafael.
#4 Twitting the fight. Paris Hilton:â€œWow, Such an honor to be brought onstage by Manny & his wife Jinkee after the fight. Canâ€™t wait to visit them when I go to the Philippines. Brazilian novelist Paulo Coelho, author of â€œThe Alchemistâ€ and a gung-ho boxing fan: â€œCongratulations Filipinos! Pacquiao rules.â€ Singer-comedian Ogie Alcasid: â€œSi mosley ay mosly ilag at mosly takbo ang ginawa sa laban kontra kay Pacman!!â€ Funny blogger iamtimyap: â€œPag bitin ang laban, you say Shane on you!â€

Kobe elevates All-Star game with his intensity and competitiveness