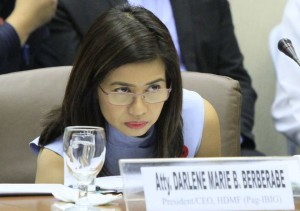 Berberabe admitted that it was only now that she heard the connection between Omni Security Investigation Inc., Binay, and Lopez.

Hirene Lopez, treasurer of Omni, is the wife of Tomas Lopez who is a member of the Pag-IBIG board of directors and president of University of Makati.

During the hearing, Senate Majority Leader Alan Peter Cayetano said Berberabe should scold her office’s legal department for not pointing out the conflict of interest in getting the contract.

He also asked Berberabe if Lopez is attending their board meetings, to which the latter replied in the affirmative.

Berberabe said it would be on the last week of January.

She earlier admitted that she asked Binay’s advice on which security agency to get and the latter recommended the services of Omni. The contract for the security services was worth P420,000 and renewable every four months to allow them to assess her security needs.

Binay is the chairman of Pag-IBIG Fund.

“I turned [to VP] Binay. I asked for his advice and the Vice President recommended Omni, that was the only participation of VP Binay. Because of the smallness of the amount, the department head was the one who signed the contract, it did not need to go through the board,” Berberabe said.

She added that a public bidding of the security service was inappropriate because of the urgency of the matter. Pag-IBIG got the services of Omni in 2011.

Cayetano believed that someone should be held accountable for the conflict of interest.

“May makakasuhan diyan. It was incumbent upon Mr. Tomas Lopez to bring up the board  the matter because his wife is there (in Omni). We will look into this. Ito ang dahilan kung kaya lumalabas na kay VP (Binay) ang Omni,” he said.

Senator Aquilino Pimentel III, subcommittee chairman, asked Berberabe if the senior officials of Pag-IBIG have already discovered the conflict of interest, to which she replied: “Di din siguro kasi ngayon ko lang narealize and only because naririnig sa Senate investigation.”

Berberabe also admitted during the hearing that she knew and have talked with Gerry Limlingan, Binay’s alleged finance officer.

“Last year (ko siya huling nakausap). Mukhang nag-coincide na di ko na siya nakausap nung nagsimula ang hearings. He is consultant of HUDCC that’s why there are meetings with Pag-IBIG Fund that he would join,” she said when asked if she knew Limlingan.

The Pag-IBIG president also admitted that her brother-in-law is the chief of staff of Binay and that it was the Vice President who recommended her appointment to the post.

Berberabe, a lawyer, was a professor at the University of the Philippines prior to her appointment. (MNS)