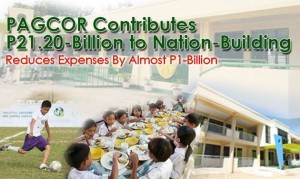 MANILA (Mabuhay) – A lawmaker has filed a measure mandating the Philippine Games and Amusement Corporation (PAGCOR) to appropriate funds to support the titling of all lands being utilized as public school sites.

Pancho said majority of these school sites, which are owned by the local government units or leased from private individuals, lack the proper legal documentation to support any efforts by DepEd on the transfer of ownership.

“There are also parcels of lands, which were verbally donated and similarly lack the proper legal documents to support the land transfer of ownership,” Pancho said.

“Upon the death of the donors their heirs claim ownership of the land resulting to court litigation, with most of these cases now pending in the court while some have reportedly been subjected to or pending demolition,” Pancho added.

Pancho said the State should to provide all lands being utilized by the DepEd as public school sites with legitimate titles.

“PAGCOR which is an active responsible and responsive partner of the government in nation-building programs should support the mandatory titling of all lands being utilized as public school sites and the registration of these real properties with the Registry of Deeds under the name of the Department of Education,” Pancho said. (MNS)

An Evening of Filipino Music and Dance with Likha (performance)

US ADVISES AGAINST TRAVEL TO PHILIPPINES AMID COVID-19 SPIKE