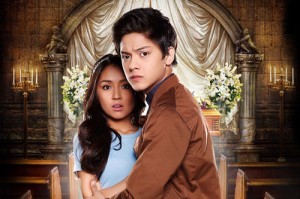 Daniel Padilla and Kathryn Bernardo could not put into words how grateful they are that a lot of people lined up to watch their movie, “Pagpag: Siyam na Buhay,” during the opening day of the Metro Manila Film Festival (MMFF).

Bernardo said she is glad to be part of the horror film which, according to her, also has lessons for its viewers.

Bernardo said the good reviews of their movie make all their hard work worth it.

She also attributed the success of “Pagpag” to their directors as well as the other people behind the movie’s production team.

Padilla, for his part, thanked their supporters who even held block screenings.

According to the Metropolitan Manila Development Authority (MMDA), “Pagpag” placed third in terms of ticket sales for the MMFF opening day.

MMDA said this year’s December 25 record is 12% higher than last year’s opening day, with some cinemas opening as early as 8 a.m.(MNS)

James Reid wrote ‘Always Been You’ about ex Nadine Lustre

Next up for Robin: Daniel Padilla team-up