“Pagsuyo” (Courtship), the maiden, full-length, theatrical production and the first Valentine offering by KALAHI Philippine Folkloric Ensemble of Las Vegas to celebrate the month of hearts, was a rousing success. The group performed before a packed Sun City Anthem Freedom Hall on February 5 and received several standing ovations from an audience comprised of Caucasians, blacks, Hispanics and fellow Asians who were obviously entertained and generously applauded every number.

“Pagsuyo” was presented by the International Cultural Connections Club of Sun City Anthem (ICCC-SCA). The end result? The ICC requested for a repeat performance in a much bigger venue this Spring. 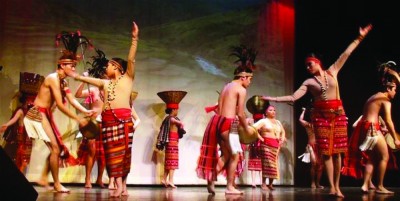 “Pagsuyo” is different from the group’s previous performances in the past. This time, it features the playful use of various artistic media without compromising the integrity of the classical musical pieces. As a popular folkloric group, KALAHI has been renowned locally for its terpsichorean inclination. In this particular production, KALAHI incorporates the vocal ensemble to broaden the approach in promoting the opulence of Filipino heritage. 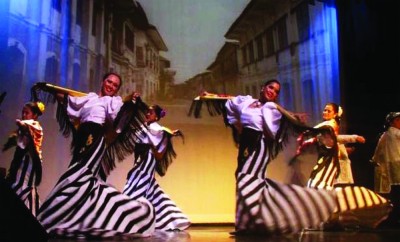 “Pagsuyo” is comprised of four carefully thought out vignettes, each depicting a region of the Philippines. As an archipelago with such an interesting history, from the arrival of its Malay ancestry, to the colonization of Spain for four centuries, up to the entry of Islam through trading systems in Southern Philippines, it was quite challenging for the creative team to encapsulate the concept of courtship – Filipino style, in vignettes that highlight courtship in different cultural settings. Each vignette represents the subtle evolution of courtship through dance in different Philippine locales. 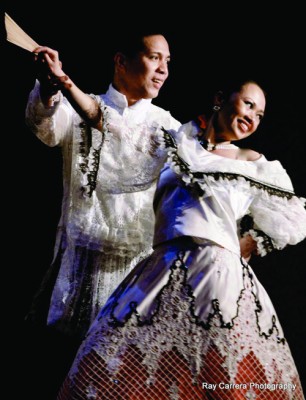 Vignette One traces the indigenous tribes of Mountain Province in the northeastern part of Luzon, one the Philippines’ three islands. These tribes were infamous for decapitating the head of their opponents during battle. However, the vignette also highlights the romanticism among these once animistic cultures. With wind and percussion instruments that emulate the sounds of nature, the vignette begins with Banga (earthen vessels) wherein women balance multiple clay pots on their heads to fetch water for household use.

Then followed Ragragsakan wherein women balance multiple baskets on their heads while headed to the marketplace where trade occurs between neighboring towns. The marketplace is usually a perfect place to meet men, and the succeeding dance Ngilin portrays a typical courtship with the playful use of a ceremonial blanket. As the couple establishes their relationship, the final two dances, Patong and the Kalinga festival dance depict community celebration of the union. The same two dances are also used during bountiful harvest, communal merriment and victory from tribal warfare. 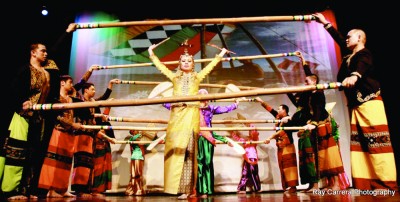 Vignette Two captures the fascinating and colorful rural Philippines. The KALAHI Vocal Ensemble breaks the monotony of the dance anthologies with renditions of traditional song pieces. It uniquely features courtship in the rural Philippine setting through traditional choral pieces a capella. Peasants celebrate feasts, usually religious in nature, through festive and colorful gatherings in the main centers of the barrios.

The first choral song, “Rosas Pandan,” relates the obsession of a young lad towards the mesmerizing beauty of a rural maiden named Rosas Pandan; followed by the song “Dahil Sa Iyo” (Because of You) which brings back nostalgic memories for the young-at-heart. The finale choral piece was a Filipino classic, “Ikaw ang Mahal Ko,” (You Are the One I Love), with a libretto that subliminally connotes both persistence and truthfulness of oneâ€™s feelings. The vignette ends with a harana (serenade) by a male soloist rendering the song “Maalaala Mo Kaya” (Remember When?), accompanied by a rondalla band using traditional Filipino string instruments. 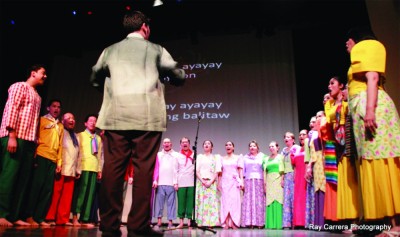 Vignette Three shows courtship in colonial Manila during the Spanish regime. During the four centuries under Spain, urban Filipinos had adopted some European customs like spending idle time strolling in a park and paseos (walk ways). The first dance, Paseo de Iloilo, depicts rivalry among men as they attempt to compete for the affection of a beautiful young maiden. Then, Polkabal, a vivacious all-female dance derived from the steps of polka and waltz popular in the 1800s in Europe.

Vignette Four captures the colorful and graceful Muslim culture of Mindanao in Southwestern Philippines, and portrays courtship among Islamic indigenous groups in the island. The vignette opens with a kulintang overture, an eight-piece brass percussion instrument, with a short improvisational display of a vinta (Mindanaoan version of outriggers with colorful sails). The first dance showcases Pagapir, a stately and graceful fan dance of the ladies of the royal court of the Maranao tribe; followed by Asik, a solo performance of an umbrella-bearing slave girl who tries to win the approval of the Sultan. This dance serves as a prologue to the piece de resistance of Vignette Four – the Singkil, a celebratory dance of the Maranao tribe usually performed during festivals. The Singkil princess and her umbrella-bearing lady-in-waiting impressively dance across clashing criss-crossed bamboo poles, and are eventually joined in by a prince in pursuit of the princessâ€™ affection.

Along the way, the creative team, headed by its director Victor Vapor, choreographers Telbert Joaquino and Ruby Michelle D. Slowiak, and choral master Basilio Jose B. Fernandez IV, also succeeded in incorporating transitional elements through songs performed by amateur members with remarkable vocal talents. It is a well-known fact that majority of KALAHIâ€™s performing and non-performing members never had any formal training in the performing arts, yet they all performed like seasoned pros. This is credited largely to the spirit of volunteerism and fiery determination that KALAHI members, who came from all walks of life, have dedicated remarkable time and effort to learn the ropes. And the result was obvious: a successful, full-length theatrical and musical production non-pareil.

Moreover, the KALAHI Philippines Folkloric Ensemble has succeeded largely in its mission: to showcase the Philippineâ€™s rich cultural heritage to Nevadans of non-Filipino descent, and thereby create awareness, and generate appreciation of another culture other than their own. The KALAHI deserves appreciation of every Filipino for its tireless efforts in showcasing Philippine tradition and culture and being the prime mover in preserving and promoting our cultural heritage in Nevada.

Mamasapano report to be discussed in Senate plenary soon – Poe

All-New 2013 Nissan Sentra Moves Up in Style, Sophistication, Refinement and Range with Up to 40 MPG Highway and 34 MPG Combined Fuel Economy