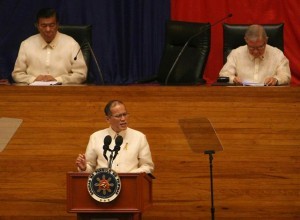 MANILA (Mabuhay) – In his State of the Nation Address on Monday, President Benigno Aquino III asked Congress to, among others, redefine the meaning of savings when it passes the General Appropriations Act for 2015.

But Malacanang apparently could not wait, although both chambers of Congress have already declared they would accede to the request, and has already redefined the term in the proposed 2015 budget it submitted to the legislature, a party-list lawmaker said.

The administration and its allies have said the redefinition of budgetary terms and the passage of a supplemental budget would, in effect, “legalize” the Disbursement Acceleration Program, key provisions of which, including the interpretation of what constitutes savings, have been declared unconstitutional by the Supreme Court and allow programs under the discredited stimulus scheme to be continued.

“The operative provisions governing ‘savings’ under the 2015 National Expenditure Program has been custom-fit to legalize DAP and allow its continued implementation in the future, despite the clear declaration of unconstitutionality issued by the Supreme Court,” Kabataan Representative Terry Ridon said Thursday.

Budget Secretary Florencio Abad submitted the 2015 NEP to Congress the day before.

Earlier, Ridon had warned that redefining budgetary terms and passing a supplemental budget would be an open challenge to the high court and might trigger a constitutional crisis, a concern Malacanang has brushed aside.

“A cursory reading of the variances between the savings definition in the current (2014) GAA and the proposed 2015 NEP shows that the Aquino administration is attempting to legalize DAP and is actually paving the road for DAP’s re-emergence in the near future,” Ridon pointed out in a statement.

The NEP serves as the prototype for the GAA, which Congress legislates.

On Wednesday, Budget Secretary Florencio Abad submitted to the House of Representatives the six-volume proposed P2.606-trillion appropriation for 2015.

Ridon compared the definition of savings in Section 68 of Republic Act 10633, or the 2014 General Appropriations Act, and the new provisions under the 2015 NEP submitted by DBM.  (MNS)