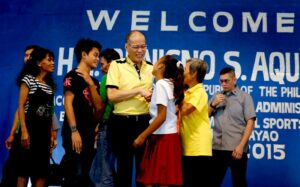 President Benigno S. Aquino III receives a warm welcome and thanking him from the benefits given by government agencies to the province during the presentation of the Accomplishments of the Aquino administration in the Province of Apayao at the Bienvenido G. Verzola, Jr. Memorial Sports Complex in Poblacion, Luna, Apayao on Wednesday (September 23, 2015). Some of the projects include the Department of Public Works and Highways-Department of Tourism (DPWH-DOT) Convergence project, hospital facilities, school buildings, and the on-going construction of the road network that would link Apayao to the provinces of Ilocos Norte and Cagayan through the Ilocos-Apayao-Cagayan road. (MNS Photo)

MANILA (Mabuhay) – Despite popular calls to lower income tax rates, the Aquino administration is wary of supporting moves for lower taxes because of the potential impact on government programs, a Malacañang spokesperson said.

At a press briefing on Saturday, deputy presidential spokesperson Abigail Valte said that Sen. Juan Edgardo Angara and Marikina Rep. Romero Quimbo – proponents of bills to lower taxes – have met with President Benigno Aquino III but that he has yet to share how the meeting went.

The president has said in the past, however, that lowering income tax rates will reduce revenues. That might force the government to raise the value-added tax to 14 percent from the current 12 percent.

Earlier this week, 18 business groups called on Aquino “to reconsider his position and heed the voice of various sectors clamoring for income tax reform.”

“Contrary to the view that reducing personal and corporate income tax rates will increase the budgetary deficit due to a reduction of tax revenues, studies have shown that a reduction in tax rates, together with the simplification of the tax system, will help spur tax compliance, and thus broaden the tax base and improve tax effort,” the groups said in a so-called unity statement.

Asked whether the Palace is concerned that taxes will become an election issue and could affect the popularity of administration candidates, Valte replied:

Stay fresh throughout your day