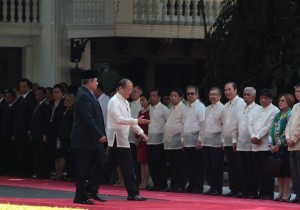 President Benigno S. Aquino III guides His Excellency Susilo Bambang Yudhoyono, President of the Republic of Indonesia, upon arrival at the Malacañan Palace Grounds during the Welcome Ceremony for the State Visit to the Philippines on Friday (May 23, 2014). Indonesia was the 13th major trading partner of the Philippines in 2013, with a total trade of US$ 3.512 billion. There is a 9,844-strong Filipino community living and working in Indonesia. This year also marks the 65th Anniversary of the establishment of the diplomatic relations between the Philippines and Indonesia. (MNS photo)

Deputy presidential spokesperson Abigail Valte said Aquino recognizes the urgency of the situation but is “understanding” of the task at hand, given the intricacies of the draft measure.

“The president himself made several follow-ups of (the) legal team (but) is understanding of the task at hand,” Valte said on government-run dzRB radio.

She noted the draft law, which would pave the way for a Bangsamoro political entity that would replace the Autonomous Region in Muslim Mindanao, is “two to three inches” thick.

One month after receiving the draft Bangsamoro Basic Law from the Bangsamoro Transition Commission, the Office of the President has yet to submit to Congress the proposed measure for ratification.

Congress resumed sessions May 5 and will adjourn sine die on June 14.

But Valte quoted Aquino as saying, “I’m cognizant of the urgency but understanding of task at hand.” “Nagche-check si pangulo, kamusta na,” she said. (MNS)

US Asian teens least likely to use drugs: study

Binay camp slams Trillanes: ‘How can you debate with a liar?’